The Theory of Everything: Marriage Is Hard, Physics is Easy 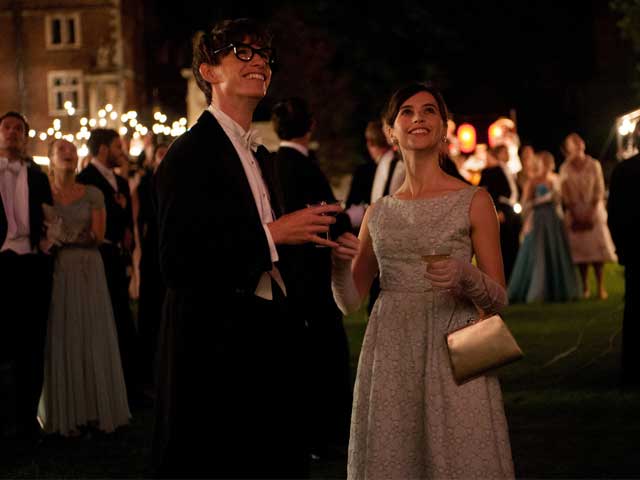 The Theory of Everything, James Marsh?s biographical film about the British theoretical physicist Stephen Hawking, tries very hard to live up to its title: It wants to show a remarkable man in full, to explore his ideas, his emotional life and his struggle with illness.

The material could hardly be richer. Hawking is both an important scientist and a fixture of popular culture, the author of best-selling books that seek to explain concepts comprehensible only to specialists. In his 20s, while still a graduate student at Cambridge, he learned he had amyotrophic lateral sclerosis (also known as Lou Gehrig?s disease and, in the movie?s preferred phrase, a motor neuron disorder). Given two years to live, he completed his doctorate and married Jane Wilde, a fellow graduate student (in European literature) with whom he had three children.

Jane Hawking?s memoir, ?Traveling to Infinity: My Life With Stephen,? is the film?s primary source (the screenplay is by Anthony McCarten), and The Theory of Everything is, above all, the portrait of a marriage. Jane, played with winning pluck and gravity by Felicity Jones, falls in love with Stephen (Eddie Redmayne) in the early 1960s, when he presents a charming mixture of gawky diffidence and supreme intellectual self-confidence. Surrounded by friends and an indulgent mentor (David Thewlis), he sets out to fathom the origins of the universe and locate the beginning of time.

Later, he will reverse himself and propose a boundaryless, beginningless cosmos. In the meantime, his illness will test Jane?s resourcefulness, pulling her away from her own work and causing her much stress and worry. In her frustration, she turns to Jonathan (Charlie Cox), a kind and handsome choir director and music teacher who also helps out with Stephen and the children. The movie is poignant and honest in showing how Jane and Stephen?s marriage leaves both of them exhausted and unfulfilled.

As Jane must sometimes literally carry her husband, so does Jones carry the movie, knitting her brows, setting her jaw and rationing tears and tremors of emotion with proper English discretion. Redmayne, hunched into a wheelchair, the muscles of his face spread into what looks like a permanent smile, must communicate his character?s feelings almost entirely with his eyes, which are remarkably expressive, conveying Stephen?s mischievous wit as well as his intelligence.

But it is in showing the application of that intelligence that The Theory of Everything tumbles into a black hole of biopic banality. My colleague Dennis Overbye recently enumerated some of the film?s historical and scientific lapses in The New York Times, but those are not really my concern. Taking liberties with facts is a prerogative of storytelling. The greater failing is that Marsh, whose previous work includes the excellent documentary ?Project Nim,? about an experiment into the linguistic capacities of a chimpanzee, seems in this case unable to capture the spirit and energy of scientific inquiry.

The substance of Stephen?s work is shoehorned into a few compressed, overly dramatic scenes. Equations are scribbled on chalkboards. Fellow physicists proclaim, ?It?s brilliant!? or ?It?s rubbish!? One of Stephen?s friends diagrams a hypothesis in beer foam on a pub table. Several earnest, potted conversations take place about whether Stephen believes in God, as his wife does. But nothing establishes the stakes in these arguments or dramatizes the drive for knowledge.

Movies often have a hard time with science, as they do with art. It is a challenge to show how intuition and inspiration yield insight and creativity, and to capture abstractions in a literal-minded medium. But it isn?t impossible. And in the case of Stephen Hawking, whose ?A Brief History of Time? is an enormously popular, widely read account of highly complex thinking, this feat has already been accomplished, by Errol Morris, in a fascinating 1992 documentary. For that matter, Christopher Nolan?s Interstellar provides a livelier and more coherent exploration of the physics of time and space than Marsh?s film.

Yes, The Theory of Everything has a different emphasis. But like so many cinematic lives of the famous, it loses track of the source of its subject?s fame. Its Stephen Hawking is a man who endured a terrible affliction and married a heroically patient woman and also accomplished something remarkable enough to put him on the cover of magazines and earn a medal from the queen. That something, though, remains beyond the audience?s grasp, which means that in a fundamental sense, everything has been left out.