Tomorrowland: A Future Where Things Are Looking Up

Tomorrowland, searching for incitements to dream, finds slogans and mistakes them for poetry 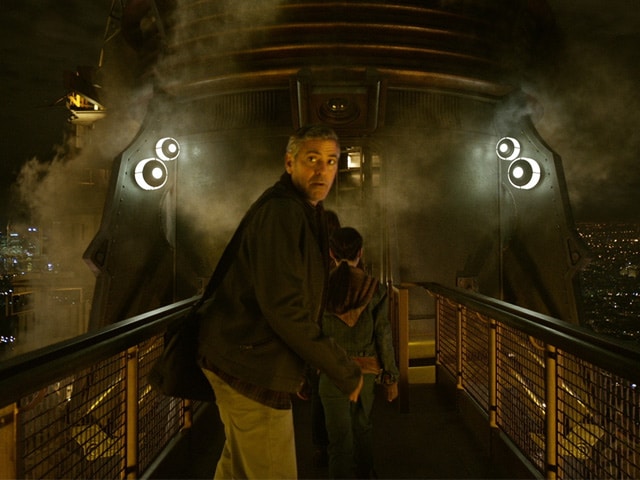 My son briefly had a youth baseball coach whose way of inspiring his demoralized players was to stand at the dugout entrance screaming at them to have fun. Tomorrowland, Brad Bird's energetic new film, a shiny live-action spectacle from Disney, reminds me of that guy. There is nothing casual or whimsical about this movie's celebration of imagination, optimism and joy. On the contrary: It's a determined and didactic argument in favor of all those things, and an angry indictment of everyone who opposes them.

Just who that might be is an interesting question. The answers proposed by Bird and Damon Lindelof, his screenwriting collaborator, run the usual gamut: politics, bureaucracy, greed, bad teachers, dumb parents, a villain with a long black coat and a British accent. Mostly, though, the fault lies with humanity itself. We are wonderful creatures, capable of dazzling feats of invention and problem-solving, but we have a damnable tendency to get in our own way, to sell out and sell ourselves short.

In the past 50 years or so, according to the Tomorrowland timeline, we've succumbed to pessimism. Where we used to look to the future with hope and excitement, we now embrace decline and futility. Everything's falling apart, and instead of making it better, most of us just wallow in gloom, especially when it comes to entertainment. A billboard advertises something called "ToxiCosmos 3," and to those of us who groove on such visions of apocalypse and catastrophe, Bird has a message: Cut it out! To those of us who can conceive something better, the message is: Wake up and start dreaming!

There are some logical - and, I dare say, some ideological - contradictions here, and a more serious problem of tone. The filmmakers want to dazzle you, but they also want to teach you a lesson. In 1965, young Frank Walker (Thomas Robinson, who will grow up to be George Clooney) arrives at the New York World's Fair with a big grin and a cool invention. It's a jetpack made out of an old vacuum cleaner, and while it doesn't quite fly, Frank figures that his hard work and can-do spirit will impress the dour judge (Hugh Laurie, earmarked for his subsequent bad-guy role) in the inventors' pavilion. Asked what the use of his contraption is, Frank replies that it's for fun, which is its own kind of utility. If people see that such a thing can exist, they'll be inspired. They'll believe in their own capacities, and in the general possibility of good stuff.

That's an excellent defense of creativity, and of the value of art, but it's a defense that is advanced so bluntly and insistently that it gets in the way of the actual art. At the World's Fair, Frank develops a crush on Athena (Raffey Cassidy), a girl, gray-eyed like her namesake goddess, who is (to keep the comparisons within the boundaries of the Disney universe) a perfect blend of Mary Poppins and Tinker Bell. Athena hands Frank a pin that is his ticket to Tomorrowland, a place founded by some of history's greatest geniuses as a combination Utopian community, R&D lab and "Atlas Shrugged" theme park.

Later, in our own time, a similar pin will come into the possession of Casey Newton (Britt Robertson), a teenager whose irrepressible gumption is expressed through acts of sabotage at the NASA launch platform near her home in Cape Canaveral, Florida. She is motivated not by hostility to the space program - which used to employ her dad (Tim McGraw) as an engineer - but rather by rage that celestial exploration is being abandoned. She wants to halt the dismantling of the facility, a wonderfully futile gesture that marks her as a potential savior of Tomorrowland and a new recruit for Plus Ultra, the secret club of artists and smarties who populate it. She, too, meets Athena, and they fight off some nasty robots on the way to find Frank, now exiled from Tomorrowland and living out his days as a grizzled crank (i.e., as George Clooney) in a ramshackle house equipped with amazing gizmos.

I was tempted to affix a little trademark sign to the word "amazing" there. The effects in Tomorrowland fall short of that standard, but part of Casey's job is to serve as a kind of on-screen shill, cuing the desired audience response by exclaiming "Whoa, that's amazing!" or "Wow, incredible!" at regular intervals. And while some of the images are interesting, even startling - a visit to the Eiffel Tower, for instance - the action is more frantic than thrilling and the sense of wonder rarely materializes.

It gives me no pleasure at all to report this. I yield to no one in my admiration for Bird's animated Pixar features - The Incredibles and especially Ratatouille, for my money one of the finest movies ever made about the pursuit of artistic excellence. And it's important to note that Tomorrowland is not disappointing in the usual way. It's not another glib, phoned-in piece of franchise mediocrity but rather a work of evident passion and conviction.

What it isn't is in any way convincing or enchanting. Clooney is wry and gruff, and then earnest and amiable, in a role that dozens of actors could have played. Robertson is perky and panicky in the same way. Among the characters only Athena has any real distinction, and Cassidy is an intriguing performer, funny and a little scary in her composure. Everyone else, Laurie included (and Kathryn Hahn and Keegan-Michael Key partly excepted), would be better as a cartoon.

To some extent, that goes for the whole movie. Its enormous lapses in narrative and conceptual coherence - its blithe disregard for basic principles of science-fiction credibility - would be less irksome in the fantastical cosmos of animation. And it would look better, too. Tomorrowland looks less like a magical city of the future, or even the Disney environment it's meant to evoke, than like an unusually clean and efficient airport, or the shopping mall beyond the multiplex where you're seeing the movie.

Perhaps Tomorrowland should not be blamed for succumbing to the poverty of vision it works so hard to attack. Maybe the forces of negativity are just too strong. But it's also possible that the movie is confused about how to imagine and oppose those forces. False cheer can be just as insidious as easy despair. And the world hardly suffers from a shortage of empty encouragement, of sponsored inducements to emulate various dreamers and disrupters, of bland universal appeals to the power of individuality. Tomorrowland works entirely at that level, which is to say in the vocabulary of advertisement. Its idea of the future is abstract, theoretical and empty, and it can only fill in the blank space with exhortations to believe and to hope. But belief without content, without a critical picture of the world as it is, is really just propaganda. Tomorrowland, searching for incitements to dream, finds slogans and mistakes them for poetry.