Overall, while the film is engaging and intriguing, it suffers from a fatigued second half and an absurd ending. 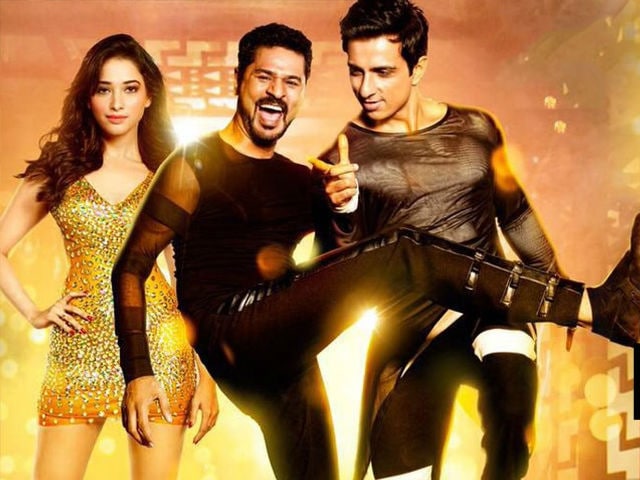 Tutak Tutak Tutiya is a typical potboiler worth its ticket price. It is a comic love story with a ghost involved.

It is the story of Krishna (Prabhudheva), a guy beyond his prime, who dreams of marrying a "modern girl" but lands up tying the knot with Devi, a "village belle", against his wishes and how his disgust gradually turns to love.

This may also be an oft-witnessed premise, but the unpretentious and novel treatment of the plot is what makes the film stand apart. The writing is fresh and the narrative is stimulating with realistic performances.

The film is Prabhudheva and Tamannaah Bhatia's canvas. There is no chemistry between them. Yet, they hook you on.

Prabhudheva as Krishna, the 34-year-old trying to hook a girl, is convincing. With a straight face and innocent looks, he is simply natural and impressive as he lives his character to the hilt. His dancing skills are forced into the narrative, but that is expected with Prabhudheva around. What adds to his charm is his flair for comedy.

Sonu Sood, as Raj Khanna the superstar is earnest, but a misfit. He not only looks jaded but he also has nothing much to offer in terms of histrionics.

In cameo roles, there are Amy Jackson, Esha Gupta and Farah Khan.

With moderate production values which are well exploited, the visuals by cinematographer Manush Nandan are aesthetically shot. With fine video effects, the computer generated images integrate seamlessly with the live action shots. This is evident in the scene where Krishna tries to escape from his house and the door panel eerily shifts and rotates, blocking him from escaping and when he does, drops him back into the room.

Overall, while the film is engaging and intriguing, it suffers from a fatigued second half and an absurd ending. But nevertheless, it keeps you in splits. A better star cast would have elevated this film.
Watch the trailer here: