As a viewer, suddenly, you get the feeling that the life of superstar Kamal Haasan is unfolding on screen 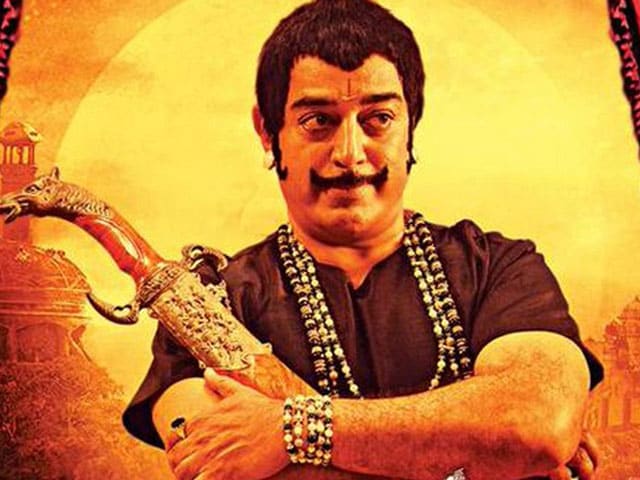 The film opens in a theatre as the camera captures the frenzied mood of fans waiting to watch the latest release of superstar Manoranjan, played by Kamal Haasan. In the movie within the movie, in some foreign location, Manoranjan is dancing to a duet with Pooja Kumar.

Here's a sixty-year-old jiving like he's thirty years younger and performing wheeling on his bike. A few scenes later, Manoranjan is on a talk show where he's aptly introduced as the king of entertainment because Manoranjan (in Hindi) means entertainment and what better name can a superstar have.

It just takes a few minutes to get to know Manoranjan, who's the son-in-law of successful producer Poorna Chandra Rao (K Vishwanath), who has produced most of Manoranjan's films since he's married to his daughter.

In a way, he's responsible for his stardom and legacy. In the opening scene, Manoranjan's wife, mother-in-law and son, Manohar, are seated in the back row of the movie screening.

Manohar is least interested and is happily texting away. A little later, we're introduced to doctor Arpana, played by Andrea, and her first encounter with Mano almost catches the eye of the paparazzi.

There's another woman in Manoranjan's life, his old flair Yamini with whom he has a daughter, Manonmani. As a viewer, suddenly, you get the feeling that the life of superstar Kamal Haasan is unfolding on screen, for he's had his share of failed relationships and affairs.

In a beautiful mall scene, we witness hero-worshipping when legions of fans show up to get a glimpse of Manoranjan. He waves at them and smiles like they mean his world. And minutes later, as he leaves in a car, his superstar mask comes off, as he necks down some whiskey to fight severe headache. He doesn't want his fans to see him drinking because superstars are role models for many, aren't they?

Uttama Villain is a terrific take on super stardom and mortality. It is actually a satire in parts. When Manoranjan learns he has only few days to live, he wants make a film in which he's immortal.

Manoranjan teams up with his former mentor and celebrated filmmaker Margadarshi, played by his real-life guru K Balachander. The character is named Margadarshi (the path shower) for a reason because it's a fitting tribute to mR Balachander, who showed the path to Kamal Haasan many years ago when he wasn't sure if he wanted to be an actor. The first scene between them is exceptionally good and the intensity with which Balachander delivers his lines is commendable and inspiring.

Manoranjan and Margadarshi decide to make a film about a theatre artist who sets out on a journey to expel a nasty king. The movie within the movie is called Uttama Villain, which is a comedy, and Kamal Haasan plays Uttaman, but people call him Mrityunjay as he dodges death many times by a whisker.

Although Manoranjan is dying a slow and tragic death in real life, as the character Uttaman he entertains and remains immortal.

As Manoranjan brings his family together, including his daughter from his affair with Yamini, you see the mask coming off the superstar gradually. The scene where he breaks the news about his health to his wife and her family is heartbreaking, and so is when he learns about his daughter from the person who raised her. Kamal Haasan owns these scenes and performs with the kind of subtlety nobody else can.

The scenes with his wife, played Urvashi; his son and daughter are easily some of the best moments of the movie.

In the end, when Manoranjan is taken inside for surgery, we see the climax of the movie within the movie. Superstar Manoranjan battles for his life inside the operation room and at the same time we see Uttaman successfully defeating the king.

In an earlier scene, Manoranjan requests Margadarshi to allow him to complete the last shot of the movie before he's taken for surgery. As Mano leaves in a wheel chair, Margadarshi promises to edit and show the film to him soon in the hospital.