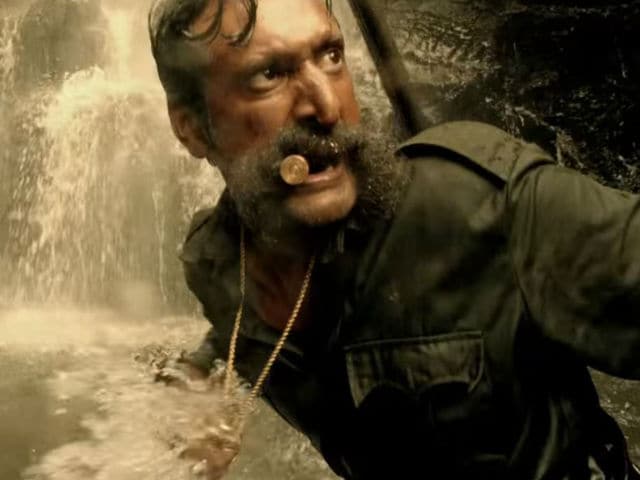 The fact that director Ram Gopal Varma has been off the boil for a while is known.

The story of real-life forest brigand Veerappan, too, is well documented.

When the twain meet in the domain of cinematic fancy, is dynamite the result? Not a hope in hell.

Veerappan does not shy away from making a great deal of noise, but the film is more akin to soggy gelatin sticks delivering a damp squib than a big explosive device triggering an earth-shattering bang.

At no point in the film does one get the impression that RGV might be anywhere near regaining his lost touch. The maker of Satya and Company is nowhere in sight in this messy, pedestrian thriller.

Veerappan, as the film tells us upfront, was the most dangerous man who ever existed.

It took one of the costliest and most elaborate security operations and a two-decade-long manhunt to eliminate him.

But the film fails to convey the magnitude of the runaround that the fugitive gave the security agencies of the states of Tamil Nadu and Karnataka that were detailed to nab him.

If the slapdash manner in which the sandalwood and ivory smuggler's eventful story is told does not knock you cold, the film's jangling decibel levels certainly will.

Much of the tale is apocryphal, with a fair bit of the narrative focus is put on Veerappan's wife Muthulakshmi (played ably by Usha Jadhav) and the revenge-seeking widow (Lisa Ray) of a policeman killed by the dreaded outlaw.

But the primary spotlight of the film is on the cocky head of the Special Task Force that took out Veerappan on October 18, 2004 in a planned operation.


This unflappable character is played by one of the film's producers, Sachiin V Joshi, and he kills the film with his deadpan acting style.

Joshi sleepwalks through the role even as RGV's music team goes hammer and tongs at our eardrums to ensure that the audience does not doze off.

Veerappan begins with a title card that quotes Voltaire: "A society gets the criminal it deserves." Sure, but did the killer of 97 cops and 900 elephants deserve this whimper of a film?

Yes, that is how vapid Veerappan is. It begins with an overlong introduction to the titular character provided by the aforementioned STF chief, who fills his men in with the antecedents of the criminal they are after.

Veerappan is presented as both a demon and a demigod who commits shocking acts of violence aimed at humans and animals alike.

He is an unfettered megalomaniac who dreams of meeting LTTE supremo V Pirabhakaran, a man he idolizes.

So the officer leading the manhunt also assumes the garb of a ruthless killer who resorts to means fair and foul to snuff out the elements that get in his way, including men in his own ranks.

The film is somewhat tolerable only as long as Sandeep Bharadwaj is on the screen in the guise of Veerappan. He inhabits the larger-than-life character with impressive flair.

In comparison to his animated presence, Sachiin Joshi resembles an automaton gurgling out his lines like a lifeless machine running on empty.

Lisa Ray, playing a policeman's widow who willingly becomes a part of the operation against Veerappan, sticks out like a sore thumb in more ways than one. The dialogue delivery - her voice is clearly dubbed - is abysmal.


In contrast, Usha Jadhav lends dignity to the character of Muthulakshmi, the woman caught in the crossfire between the police force and her husband.


She brings out the tussle in her mind between doubt and trust in all its complexity. But somehow the nuances that she informs her character with are lost in a film that does not go beyond the visceral.

Veerappan is about an all-out assault on a band of brigands. But did it have to be such a battering of the senses?

If the ear-splitting background score is bad enough, the fidgety camerawork is a strain on the eyes.

This film is another reminder: it is time to launch a manhunt for the Ram Gopal Varma that Bollywood watchers once knew.

Or, else, let us just move on just as Hindi cinema has done from the heydays of the gangster flick.