All that's big may not necessarily be great. Hope Shankar realises that much better films can be made on a smaller canvas and much lower budget. 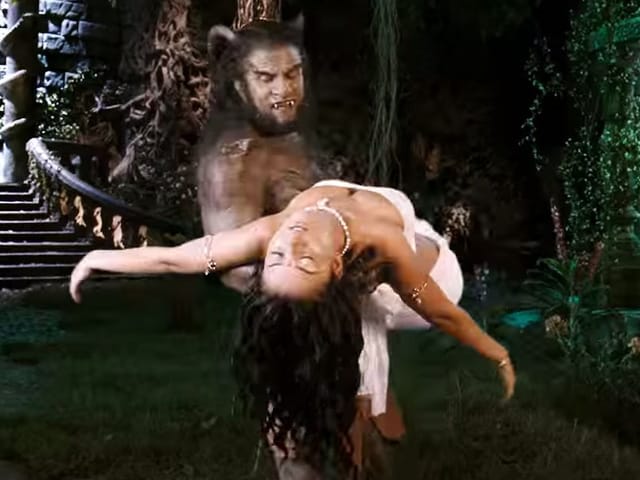 Shankar, who wears his commercial tag like a medallion, has an addiction for making big commercial films. While he's been quite successful at it all these years, it has slowly started to have an adverse effect on his films to the extent that even the presence of a bankable star, say Vikram, doesn't add much value to the output.

In his much anticipated film I, Shankar proves that only he can take a wafer thin story and turn it into something outlandishly beautiful yet complex, leaving you with an afterthought - "Why can't he ever make smaller films for a change?"

Mostly known for making message-oriented films in which the hero singlehandedly takes on the system, Shankar attempts to tell a romantic tale in his latest offering, said to be made at a budget of over Rs 100 crore.

Vikram plays a bodybuilder, Lingesan, who idolises Arnold Schwarzenegger and supermodel Diya, played by Amy Jackson. If the posters of Arnold decorate the walls of his lower middle class home and his gym (which is named after Arnold), there's a box full of women's products endorsed by Diya in his bedroom.

In a funny scene, when he's caught red-handed by his friend and asked what he is going to do with all the products (holding a pack of sanitary napkin), Lingesan nonchalantly says he will use it as a pillow.

In these refreshing initial moments, Shankar helps us understand that Lingesan has extreme liking for Diya but doesn't love her yet because of their social and cultural divide. There's a wonderful scene where Lingesan's mother asks his friend what's wrong if her son is fond of a model he sees on television, newspapers and hoardings?

In any other film, he would've stalked her to the point she eventually gives in. Here, Shankar doesn't tread that path and that's a big relief. Then, the story takes a detour when Lingesan turns overnight into model Lee, soon becoming a sensation in the glamorous world of advertising and earning the wrath of a few. It is from here that Shankar's I ends up becoming a big budget mess and an old-fashioned revenge drama.

Shankar likes to take his audiences to vast, unknown locations even if it's not required. This time he travels to China, shoots in some picturesque locations and makes Vikram feature in a well choreographed action sequence. It's here that he makes Vikram and Amy fall in love.

He feels the need to create a love triangle and introduces a gay makeup artist, played by Ojas Rajani, who lusts after Vikram. It's a shame that Shankar resorts to playing with the sensibilities of a gay character, openly mocking at the sexual orientation.

Vikram may have worked tirelessly gaining and losing weight for his role, but that doesn't make the film any less disappointing. In both the roles, as a body builder and a hunchbacked man, he makes one take notice of his potential and how far he can go for cinema.

Amy Jackson chips in with a surprisingly decent performance and has worked hard on her lip sync, at least in some crucial scenes. Upen Patel, Suresh Gopi and Ramkumar come across as misfits in their respective roles. There are far more good looking local actors who could've played Upen's part convincingly.

Given the lavish budget, I is visually grandiose and that's not a surprise. But the visuals don't make up for the weak script. Even AR Rahman's music doesn't make much of a difference but for remaining mostly soothing and melodic. Returning after a gap of three years, Shankar should've gauged the pulse of the audiences who now prefer short stories over a three-hour film.

All that's big may not necessarily be great. Hope Shankar realises that much better films can be made on a smaller canvas and much lower budget.