Amitabh Bachchan and Farhan Akhtar, working together on the screen for the very first time, are a house on fire in tandem. 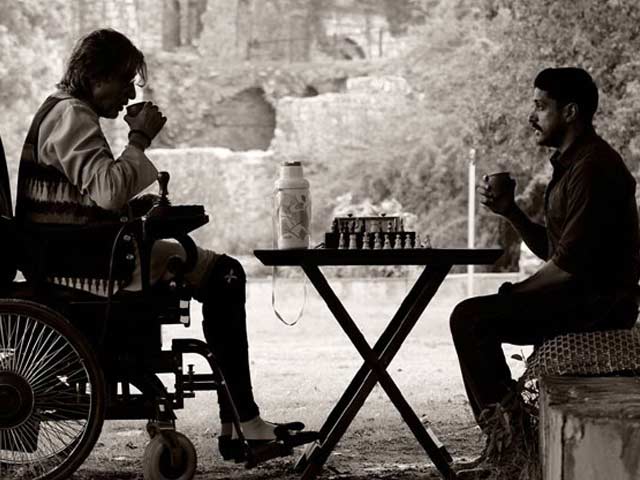 The surface vim and vigour on show in Wazir is considerable, but Bollywood?s first big release of 2016 is disappointingly low on substance.

Cinematic tales of parents mourning the loss of a young child constitute an effective genre that has been well exploited by filmmakers over the years, and Wazir has two such fathers grappling with the dual burden of grief and guilt.

But that essential narrative thread is subsumed by the overarching theme of revenge. In the bargain, the film loses the emotional tug that might have lifted it above the median.

Amitabh Bachchan and Farhan Akhtar, working together on the screen for the very first time, in tandem, are like a house on fire. But the duo?s all-out efforts to add sparkle to the film?s rough edges aren?t enough to turn the patchy game around.

The screenplay (Vidhu Vinod Chopra and Abhijat Joshi) draws obvious parallels between human existence and chess. It takes pains to assert that while the game of 64 squares allows players a second chance, life does not.

Wazir is supposed to be a suspense-filled thriller. While it does deliver a few thrills, especially in the slickly mounted and crisply edited first quarter, the intrigue it seeks to weave around its two pivotal characters simply does not cut deep enough.

It has its share of twists and turns, but barring the final gambit that spins the tale on its head, none of it is particularly startling.

Several of the surprises that it attempts to spring do not quite come off. The reason: they aren?t surprises at all. The audience can see them coming from miles away.

Two anguished men grappling with the death of their daughters in tragic mishaps bond over their shared sorrow and the sport of shatranj.

One of them is Daanish Ali (Farhan Akhtar), a suspended anti-terror squad (ATS) officer who loses his four-year-old daughter in a shootout with desperadoes in the heart of Delhi.

He compounds that act of recklessness in the line of duty by barging in without authorization on a raid on a sleeper cell that includes the terrorist whose bullet felled his daughter. As a consequence, Daanish is suspended from the force.

His wife, danseuse Ruhaana (Aditi Rao Hydari), drifts away from him, holding him solely responsible for the grave tragedy that tears their once-happy life apart for good. He turns into an emotional wreck.

Enter the wheelchair-bound chess master Omkar Nath Dhar (Amitabh Bachchan), a Kashmiri Pandit who, on his part, has also had an exceedingly rough past.

Daanish and Panditji bond big time over shatranj. As the former gradually masters his moves on the chessboard, the older man pulls him into a revenge plot centred on the mysterious death of his daughter.

On the board of life?s unpredictable chess board, the two men play a game that is wholly predictable.

The older gentleman, who lost his legs and his wife in a serious road accident, has reason to believe that his daughter?s demise, blamed on a fall on a staircase at the home of the welfare minister Yazaad Qureishi (Manav Kaul), was a case of murder.

The first half of Wazir is relatively captivating as the stage is set for the business end of the tale. However, post-interval, the film loses steam because it degenerates into a straightforward story of vengeance.

It progresses along largely anticipated lines as the ex-lawman goes all out to solve the mystery behind the death of the chess guru?s daughter.

As soon as Daanish gets cracking, a shadowy figure named Wazir surfaces from nowhere and launches a murderous attack on Panditji.

That twist is designed to add frisson to the proceedings, but the violent intruder?s talk of a langda pyaada taking on a powerful badshah gives the game away. From this point on, it gets all too obvious what is up ahead.

Wazir puts all its crucial cards on the table far too quickly, robbing itself of the shock factor that would have made all the difference between edge-of-the-seat suspense and tame by-the-numbers thrills.

Wazir has much more of the latter than the former. So despite the strong performances by Amitabh Bachchan and Farhan Akhtar, the film is only intermittently effective.

Aditi Rao Hydari as Daanish?s estranged better half is hardly allowed a full tilt at the character that she plays.

She floats in the background, wearing the look of a severely distraught woman. But she does a good job of letting her silences speak.

The actor who stands out is Manav Kaul and this is notwithstanding the fact that he has very little to play with in terms of footage and character nuances.

Neil Nitin Mukesh in the guise of the menacing Wazir makes the most of the single scene the screenplay gives him, but there is absolutely nothing special about John Abraham?s ?special appearance?.

Wazir, Bejoy Nambiar?s third venture after Shaitaan and David, bears the director?s imprimatur. But its visual and technical sheen pales in the absence of a truly gripping story.

Wazir is at best a one-time watch, if only for the academic interest of viewing Amitabh Bachchan and Farhan Akhtar in the same film.