If anything, Welcome 2 Karachi is only a maddening mess 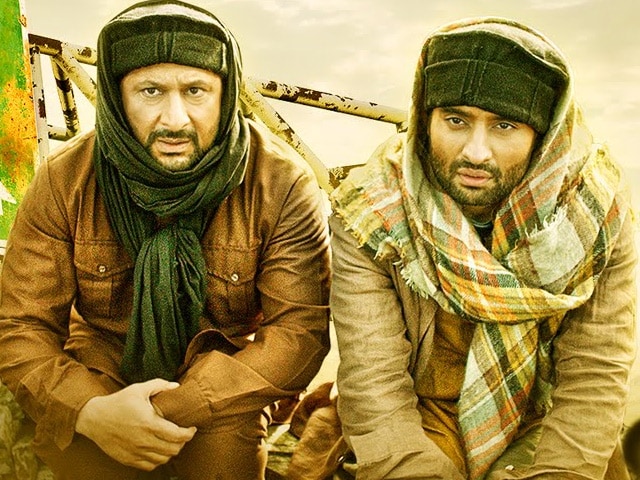 Be warned: two dimwits on the run from assorted gun-toting pursuers in Pakistan isn't an edifying spectacle. The more they run the more trouble they get into and the more moronic the film becomes.

A rough-hewn comic caper that is funny for all the wrong reasons, the film hinges on two done-to-death clichés: Pakistan is the most dangerous place on earth and a Patel will do anything it takes to get to the US of A.

The screenplay, credited to Vrajesh Hirjee and the director, among others, mixes the two hackneyed ideas in a mindlessly skewed plot in the hope of rustling up an entertaining concoction about two grown-up idiots who know no better than to mistake a gun courier for a pizza delivery boy.

It is all meant to be a harmlessly madcap rigmarole designed to give producer Vashu Bhagnani's son, Jackky Bhagnani, another shot at stardom.

If anything, Welcome 2 Karachi is only a maddening mess that is unlikely to do poor little Jackky's career any good at all.

The naturally gifted Arshad Warsi does his very best to rise above the morass, but his effortless comic timing is wasted because the hilarity in Welcome 2 Karachi is laboured at the best of time.

When a hideout of terrorists is unintentionally blown up, he pipes up: Taliban khaliban ho goya. That is the exactly kind of vacuity that Welcome 2 Karachi thrives on.

On another occasion, he oozes wisdom. Borders are small, differences are big, he says, adding that there are no wires on the Indo-Pak border because there are thieves on both sides.

Here's the plot: Jamnagar boy Kedar Patel (Jackky Bhagnani) is at the end of his tether because his US visa application is rejected repeatedly.

Sacked navy man Shammi Thakur (Arshad Warsi) offers him a boat ride to the destination of his dream.

Amid a song and dance on the deck celebrating the virtues of daaru and tequila, the boat is hit by a storm. The vessel capsizes and the duo washes up on the shores of Karachi.

A bomb blast on the beach kills many. Kedar and Shammi escape with minor injuries and find themselves in a hospital.

When they discover where on the world map they are, they resort to desperate measures to make their way back to India.

In the bargain, they are sucked into the Karachi underworld, are whisked away to a jihadi camp in Waziristan, and eventually end up as pawns in the hands of a Pakistani politician and an American spy who want to take credit for the destruction of the Taliban camp.

It is all so spectacularly nutty that one isn't sure whether to laugh or cry. No matter what state Welcome 2 Karachi reduces you to, it will definitely leave you marvelling at its sheer unalloyed inanity.

Much of the pain that the film inflicts stems from its hopelessly perverted and superficial understanding of contemporary geopolitics.

In Karachi, everybody is armed and dangerous, the Taliban is omnipresent, the Americans call the shots from the shadows, and the Pakistani intelligence operatives and politicians floating around in the background are buffoons.

Welcome 2 Karachi passes off locations in Bradford for the streets and bylanes of Karachi.

In a bizarre sequence that perfectly sums up the film's warped worldview, agents from India, Pakistan, Israel, Palestine, the United States and China have a go at each other with their weapons and tanks.

All this unfolds on the road in front of the Indian embassy in Clifton while our two protagonists cower like scared rabbits in a corner around the building. The audience, too, cannot but cringe.

Only the foolhardy would underestimate Bollywood's ability to do worse, but it is unlikely that you will see another film this unabashedly daft this year. Resist the itch.