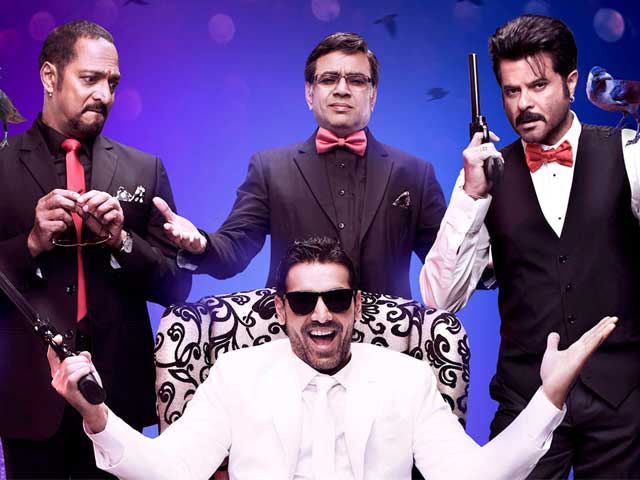 When a movie idea overstays its welcome, it matters little whether its movement is back or forth.

No matter how hard the makers try to rustle up something akin to a joyride, it can only yield the cinematic equivalent of a stale joke.

Welcome Back rolls it all out with vengeance: snazzy automobiles, eye-popping locations, flashy conmen, a relentlessly obtrusive background score and an unconscionably elongated climax in the desert.

But nothing that this nonsensical action comedy unleashes, not even the in-form Anil Kapoor-Nana Patekar pair, can compensate for its absence of substance.

Welcome Back, a follow-up to a money-spinning comic romp made all of seven years ago, is as appealing as a dunk in a garbage dump.

Sun City has given way to Dubai and a quintet of new actors ? John Abraham, Shruti Haasan, Dimple Kapadia, debutante Ankita Srivastava and Naseeruddin Shah ? have been added to the ensemble cast.

The numbers do not add up because even the seasoned Naseeruddin and Dimple are unable to find their feet in this wild sandstorm of a movie.

Botched-up betrothal plans ? there are a number of them strewn across this mind-numbingly convoluted film ? consume a lot of the footage without generating a modicum of mirth.

How much fun can watching two bumbling and blundering bachelors scampering around garish mansions and blindingly showy locations in Dubai and Abu Dhabi in search of elusive love be?

Add to that the spectacle of a beefy John Abraham peddling his wares, both as tough guy and lover boy, and you have a movie that allows the audience no respite from its inanities.

All one can figure out amid the ear-splitting din is that Uday Shetty (Nana Patekar) and Majnu Bhai (Anil Kapoor) are now legitimate businessmen in the UAE.

They have left their days of crime behind, but not their swagger and bluster. One character calls them the ?Laurel and Hardy of goondas?. Wish they were half as funny!

The two ex-gangsters are desperate to get hitched, but a sister, Ranjana (Shruti Haasan), materialises out of the blue and thwarts their intentions.

The duo now has to look for a match for the girl because the mother (Dimple Kapadia) of the princess (Ankita Srivastava) that both Uday and Majnu have fallen for lays down a precondition: get the sister married off first.

The search for a match leads to Ajju Bhai (John Abraham), the just-discovered stepson of Doctor Ghungroo (Paresh Rawal).

But this guy is a dreaded gangster and Uday Shetty wants a decent boy for his sister. Ajju does not fit the bill.

So the whole lot of them subject each other to a whole lot of games that culminate on an island inhabited by a sightless don, Wanted Bhai (Naseeruddin Shah), and his drug addict-son Honey (Shiney Ahuja).

At the end of many preposterous cross-connections that pit everyone against just about everyone else, the entire cast head to the desert where cars, choppers and camels jump into the mayhem.

The highlight of this climactic segment are the flying contraptions ? they look like life mini-helicopters ? that dissolve into a ball of fire when they hit the ground, signifying in many ways the nature of this film.

Welcome Back has some funny one-liners, but they are too few and far between.

A couple of the gags, including one in which Uday Shetty and Majnu Bhai play antakshari in a graveyard, are hilarious.

But in the main, Welcome Back passes off loads of asinine humour in the guise of comedy. Buffoonery works only when it is propelled by inspired lunacy. There is none of that in Welcome Back.

Especially outrageous is the manner in which co-writer and director Anees Bazmee treats the run-up to the pivotal love story between Ajju Bhai and Ranjana.

The lovebirds take each other for deaf-mutes and that mistaken assumption become the pretext for some cringingly silly and objectionable scenes. Poking fun at disability isn?t cool.

The makers of Welcome Back give their utter lack of sensitivity away completely later on in the film in their portrayal of the blind don. One character calls him a ?fused bulb? and that is supposed to be raise a chuckle.

With Anil Kapoor and Nana Patekar plunging headlong into their goofy characters, Uday and Majnu are the only bright spots in this overcrowded and overstretched comedy.

Paresh Rawal, reprising his Welcome role, is trapped in a web of mannerisms that only serve to enhance the film?s staleness quotient.

John Abraham, of course, gets his share of attention in song situations and fight sequences, but the figure of Ajju Bhai never quite evolves beyond being a mere add-on.

Naseeruddin Shah gives Wanted Bhai his best shot, but this baddie isn?t half as flashy or colourful as Feroz Khan?s RDX.