A few plot twists in Whiplash test the limits of credibility 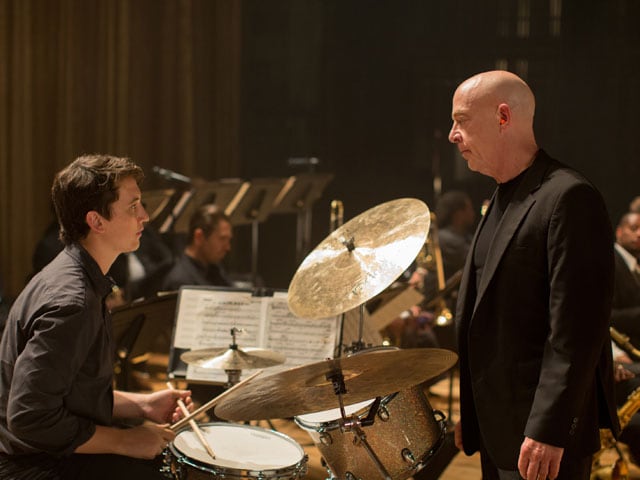 The world worships excellence and runs on mediocrity. Most of us are fated to dwell in the fat middle of the bell curve, admiring and envying those who stake out territory in the higher realms of achievement. There is a wide gulf between doing your best at something and being the best at it, a discrepancy in expended effort and anticipated reward that is the subject of Whiplash, Damien Chazelle?s thrilling second feature.

This story of an ambitious young striver and his difficult mentor could easily have been a sports movie, and structurally, it resembles one. There are montages of grueling practice scattered among scenes of tense competition, all of it building toward a hugely suspenseful (but also, to some extent, never in doubt) championship game moment of reckoning. But Andrew Neiman (Miles Teller) is a jazz drummer rather than an athlete, enrolled at a highly selective Manhattan school (Juilliard in all but name) and under the sway of a charismatic and terrifying instructor, Fletcher (JK Simmons).

Fletcher has a first name, but nobody has the nerve to use it, and in classic drill sergeant or gym teacher fashion, he calls his students by their surnames, generally in the course of browbeating and humiliating them. Progressive pedagogical methods have not penetrated the room where his studio band practices, a virtually all-male preserve of sarcasm, sadism and enforced virtuosity. There is nowhere Andrew would rather be.

Chazelle, a 29-year-old natural-born filmmaker whose previous feature was the stylistically daring, hipster-cute musical romance ?Guy and Madeline on a Park Bench,? has an aficionado?s ear for jazz and an offbeat sense of genre. He and the director of photography, Sharone Meir, give ?Whiplash? the brooding, spooky look of a horror movie, turning the New York streets and the school hallways into a realm of deep, expressive shadows. There is an atmosphere of whispery menace, and Simmons prowls the screen with a vampire?s stealth and a killer?s wry half-smile. Fletcher is a seductive monster, swiveling from charm to nonchalance to violent rage with a snap of the fingers. The scariest words a studio band player will ever hear are ?not quite my tempo.?

But Andrew eagerly signs up for Fletcher?s cult of perfection, though whether in the role of acolyte or human sacrifice remains in question for most of the movie. Andrew is not one for modest aspirations: He wants to vault beyond the masses of session guys and second-stringers into the pantheon, to keep company with Buddy Rich and Charlie Parker and the other giants of the art form. This makes him a bit insufferable, and Teller, adept at finding the ambiguous middle ground between self-confident nice guy and smug jerk, is not shy about demonstrating Andrew?s arrogance.

Andrew is a young man at a crossroad. He can either pursue normal activities for a person his age - dating Nicole (Melissa Benoist), a Fordham student; going to the movies with his dad (Paul Reiser) - or he can practice until blood splashes on the skins of his drums in hopes of impressing his mentor. Whiplash, which takes its title from one of the tunes Andrew must master, neatly maps out the nature and cost of this choice, and the anguish and exhilaration it brings him.

Maybe a little too neatly at times. For all its dexterity and assurance, the movie has its share of false notes and rhythmic stumbles. The contrast between Fletcher and Andrew?s father, who long ago gave up his dreams of literary glory to become a teacher, is drawn a little too emphatically, as if nice guy and artist were completely antithetical. A few plot twists test the limits of credibility. And there is something a little dispiriting - if sadly unsurprising - about the way Chazelle turns a historically African-American art form into the existential arena for a couple of white guys.

Still, the battle of master and disciple is exciting and terrifying to witness, and, at its best, the film can feel as wild and spontaneous, as risky and precise, as a live jam session. The music - original compositions by Justin Hurwitz, Chazelle?s collaborator on ?Guy and Madeline,? supplemented by some classic jazz numbers - is potent and pungent.