The final impact of the film is not as gloomy as the title might suggest. Give it a shot 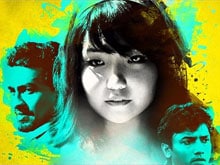 Imagine this scenario: a perky little soul in the middle of a room full of big boys with booming voices manages to pipe up above the din and get a volley of words in edgewise.
May be the ideas aren?t fully shaped yet and the manner of articulation, too, borders on the tentative. Yet the words that flow out do count because they are fresh, forceful and fuelled by spontaneity.

Yahaan Sabki Lagi Hai, a bright specimen of Mumbai-style mumblecore written, directed and produced by first-timers Tina A Bose and Cyrus R Khambata, is like the ?perky little soul? that occasionally wiggles its way into the multiplexes and takes us by surprise.

Of course, this isn?t the kind of film that will have crowds queuing up at the box office. It will likely not even see average moviegoers troop out of the hall in high spirits, asking for more.

But the more sensitive and receptive elements among the audience might just find enough takeaways in this small and spirited cinematic essay which addresses many a theme of contemporary relevance.

Yahaan Sabki Lagi Hai is a small film with a big-picture take on India?s deeply entrenched social and belief systems.

It highlights the divide between the rich and the poor, the conflict between youthful cynicism and smug certitude, and the chasm that exists between those that control the world and those that are doomed to suffer the consequences.

It does all this with disarming subtlety by the means of a story of three dissimilar individuals who are on divergent trips in life even as they undertake a single game-changing journey.

The multi-lingual Yahaan Sabki Lagi Hai is an unconventional road movie that is completely independent in spirit, much more so than many of the films which are normally clubbed under the Hindi-indie rubric.

Its cast has no known actors. Its songs play out only in the background. And its drama, mostly dialogue-driven and internal, peels layers off the past and the present in tiny bits rather than in big sweeps.

Yahaan Sabki Lagi Hai is a coming-of-age comedy with a difference. It has a philosophical edge that pushes it close to the pop sociology domain as a bunch of carefree, pot-smoking youngsters labour to make sense of life, but without much apparent success.

A merchant navy officer Bharat (Varun Thakur), a wealthy and footloose girl Kesang (Eden Shyodhi) and the latter?s loyal driver Chandu (Heerok Das) are on their way to a birthday party at the beach house of the woman?s ex-boyfriend Shanti (Teeshay Shah).

On the way, they are mugged, drugged, robbed of their vehicle, mobiles, wallets, and watches left unconscious in a jungle.

When the three wake up in the middle of nowhere, Chandu has a bleeding gash on his head, Bharat remembers nothing at all, and Kesang is minus a teeny-weeny piece of clothing that points to the possibility of the girl having been molested.

Amid the crisis, as they look for a way out of the mess, their innate differences grow wider and they bicker like cats.

The characters speak in English, Hindi, Bengali and Marathi (in one passing scene), and the lines that they spout are peppered with profanities. Through it all, they sound believable.

Eden Shyodhi plays the most clearly etched out of the principal characters ? she is the one with the questions that create the moral contexts, both immediate and general, of the story -- and the debutante does full justice to the role.

Varun Thakur as the cocksure sailor boy on the way to propose to the girl he loves and Heerok Das in the role of the impecunious Chandu looking for an escape from drudgery and deprivation also present convincing portraits of two contrasting faces of youth.

Yahaan Sabki Lagi Hai is about people screwed up as much by the system as by their own follies, but the final impact of the film is not as gloomy as the title might suggest. Give it a shot.