"It just happened. I didn't expect. I just had a 50-50 chance. But, it was good, they were nice people. They believed in what I said. Chris told me, 'I'm taking your word for it AR' and I said 'just trust me'," said A R Rahman 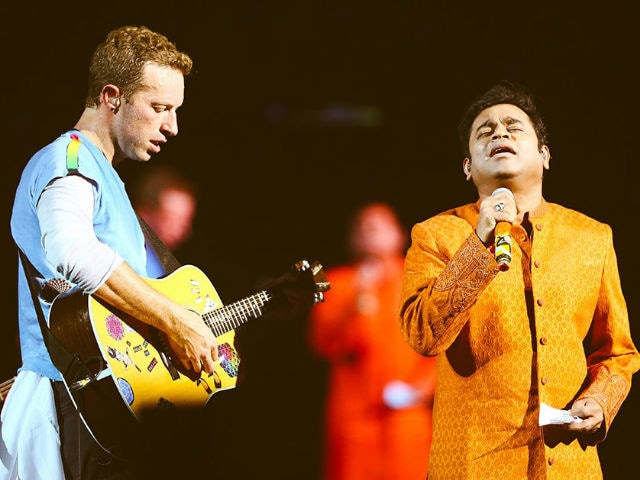 Oscar-winning music composer A R Rahman recently played live in the Global Citizen Festival India in Mumbai held on November 20. But it was performance with Coldplay frontman Chris Martin during which they sang Maa Tujhe Salaam from Rahman's 1997 studio album Vande Mataram truly stunned everyone. Of the gig, Rahman said: "It just happened. I didn't expect. I just had a 50-50 chance. But, it was good, they were nice people. They believed in what I said. Chris told me, 'I'm taking your word for it AR' and I said 'just trust me'."

Meanwhile, Rahman says his way of dealing with criticism is to take only the constructive stuff and leave the rest behind. "Criticism is important. But if you want to satisfy everyone, you'll satisfy no one. You make your music so generic. Some people like something, others don't like certain things. I like criticism which is constructive," Rahman told PTI. "Sometimes you know that it's out of spite so, I take the ones, which are constructive. Because we all are human beings, we tend to focus on certain things with a certain vision and sometimes we ignore certain things," he added.
Rahman, 49, marked his music-composing debut with 1992 Roja and there was no looking back for the singer-composer. He said his absolute passion for music has brought him to the place, where he is today. "My constant search is 'to feel alive'. Because we need a 'reason' to search. And you have to keep inventing that reason. That keeps me passionate to make music. Anything without passion is useless. Passion brings love, dedication and hard work," Rahman said on the sidelines of NFDC Film Bazaar.
Rahman credits his family and fans for helping him achieve global fame. He is the only musician from India to win two Academy Awards, a Grammy Award and a Golden Globe. "I think I'm very blessed. I owe these blessings to God, my family and fans and also the love I get from the people, who listen to my music," he said.
The singer was in Goa to launch his hit track from Vande Mataram in virtual reality format by giving it a 360 degrees immersive experience at film bazaar. "It's a coincidence that I've launched it on the 10th year of Film Bazaar. It's actually amazing. I slowly got introduced to VR and I was satisfied that this is going to be next big thing and it's such an unexplored thing," he said.
"VR makes the real things even better. It makes you feel that it's there with you. It actually reinvents the whole nostalgia and makes you go back to experience it in a very different way. It's so beautiful," he added.
The composer is now looking forward to his upcoming project 2.0, which stars superstar Rajinikanth, Akshay Kumar and Amy Jackson. The film which is a sequel to Enthiran (released as Robot in Hindi) is directed Shankar. Rahman composed the music for the prequel too. "It's still a work in progress. We have just finished one song. And we are ready for the next one," he said.