Donning a beard and a geeky look, the new 'chick-magnet' looked handsome in a printed white t-shirt and track pants 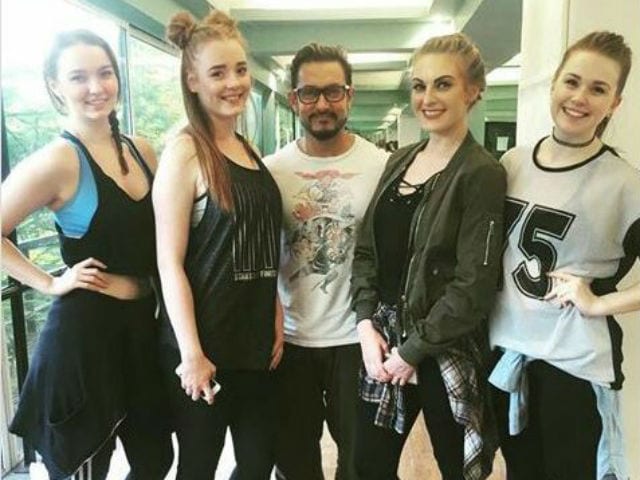 This image was posted on Twitter by Aamir Khan FC

Bollywood celebrities, especially Aamir Khan, seem to be preparing for the upcoming Coldplay concert as much as the fans of the British band are.
Pinkvilla.com recently posted a photograph of the 51-year-old star posing for a photograph after the dance rehearsals of Coldplay's upcoming concert.
Donning a beard and a geeky look, the 'chick-magnet,' as he's cited, looked handsome in a printed white t-shirt and track pants.
The PK actor is additionally surrounded by a line of ladies, who could possibly be performers at the show.
Coldplay, founded by lead singer Chris Martin in 1996, is coming to perform at Mumbai on November 19, as part of the United Nations Global Citizen Festival.
The 2016 Indian chapter of the festival will see other Bollywood stars including Amitabh Bachchan, AR Rahman, Katrina Kaif, Farhan Akhtar and more.
On the work front, the Ghajini star will be next seen playing wrestler Mahavir Singh Phogat in upcoming biographical sports drama, Dangal.
The Nitesh Tiwari film releases on December 23 this year.
(Except for the headline, this story has not been edited by NDTV staff and is published from a syndicated feed.)