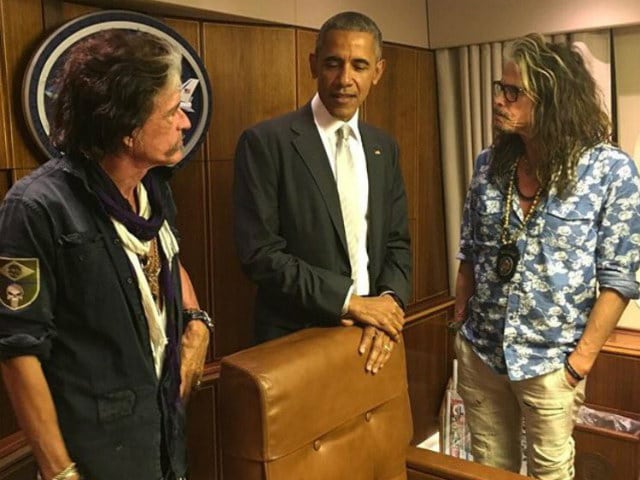 "No better way to finish a beautiful south American tour from Aero Force One to Air Force One...the best welcome home ever," Aerosmith's Steven Tyler tweeted. The musicians were on Tyler's jet, while Obama was departing after spending time in the Sunshine State campaigning for Hillary Clinton

Just your typical chance encounter at an airport: Aerosmith guitarist Joe Perry and singer Steven Tyler got a tour of Air Force One - and a meeting with POTUS himself - when the rockers found themselves on the same Florida runway as President Barack Obama this weekend.
The musicians were on Tyler's jet, while Obama was departing after spending time in the Sunshine State campaigning for Hillary Clinton. "While we're sittin' on the runway, we're lookin' at Air Force One, and we got out, took some pictures and the next thing you know, we're on the plane being given a tour," Perry told music website Vanyaland.
According to Perry, the president found out that the pair were on board and came to meet them and snap a few photos. "Steven and I have had some pretty cool adventures, but this one is right up there," he said. "Being a Republican, I still have a lot of respect for the office, you know? Sitting there with the commander in chief and leader of the free world ... it was really cool."
"Best welcome home ever," Tyler tweeted.

But band drummer Joey Kramer, who wasn't at the confab, wasn't as enthusiastic. "This is not representative of @Aerosmith!" he tweeted, along with the band account's tweet about the meeting, which has since been taken down. Later he tweeted an explanation of his objection: "I don't want to be included in political banter."
(c) 2016, The Washington Post
(Except for the headline, this story has not been edited by NDTV staff and is published from a syndicated feed.)