Ahanaa and her sisters, however, keep changing positions to flash their signature poses in front of the camera. Ahanaa Krish, who shared the video on Facebook, wrote: "Tune of the season got us like" 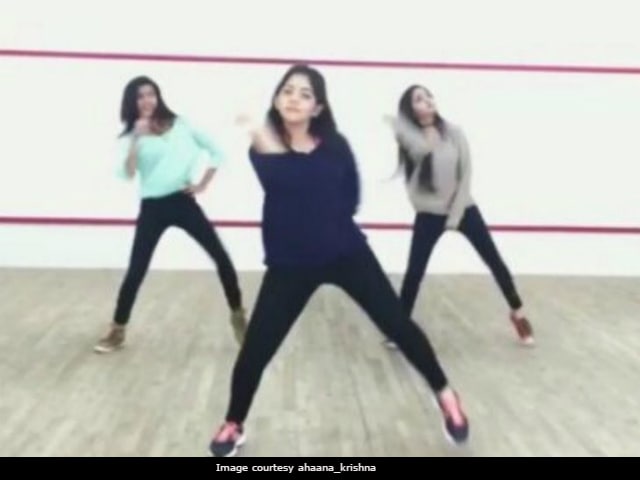 Ahanaa Krishna and her sisters in a still from the video (courtesy: actressahaanaofficial)

South actress Ahanaa Krishna is yet another dance enthusiast to put on her dancing shoes for Ed Sheeran's Shape Of You. Ahanaa has also roped in her two sisters - Diya Krishna and Ishaani Krishna for the video. Ahanaa, the daughter of Malayalam actor Krishna Kumar, is just one-project-old in the film industry. She made her acting debut with 2014's Njan Steve Lopez. The video features Ahanaa and her sisters performing a coordinated choreography of the chartbuster in a dancing studio. Ahanaa mostly lets her sisters take the spotlight with Ahanaa in the second row. The trio, however, keep changing positions to flash their signature poses in front of the camera. Ahanaa Krishna, who shared the video on Facebook, wrote: "Tune of the season got us like."
Watch Ahaana and her sisters' version of Shape Of You:

However, the cutest dance cover of the song was performed by former beauty queen Sushmita Sen and her daughter Alisah. If you remember, mid-way though the performance, Alisah was unable to keep pace with Sushmita and embraced her in a hug. Awww.


#frameofmindthere is a song I love by #leeannwomack"when you get the chance to sit it out or dance, I hope you dance" these moments (be it around my #friends or my #babies ) are a wonderful reminder that each time a situation suggested to "SIT IT OUT"...WE CHOSE TO DANCEmoving to our own beat #anytime #anywhere #anyhowAlisah with breaded hair owns her moves#toocute Renee saunters down the beach celebrating life with #maa #memories #cherished #happiness #sharing I love you guys!!! #ihopeyoudance#edsheeran #shapeofyou

Earlier this year, a dance version of Shape Of You was performed by students of IIT Roorkee that went crazy viral.

Meanwhile, Ed Sheeran's Shape Of You has also been selected for a delightful Bhangra version and a dance cover choreographed in Odissi, which had sent the Internet into a meltdown when released.