Ae Zindagi Gale Laga Le: Alia, who struggles with her career and her personal relationships in the film, stars in dual roles in the song 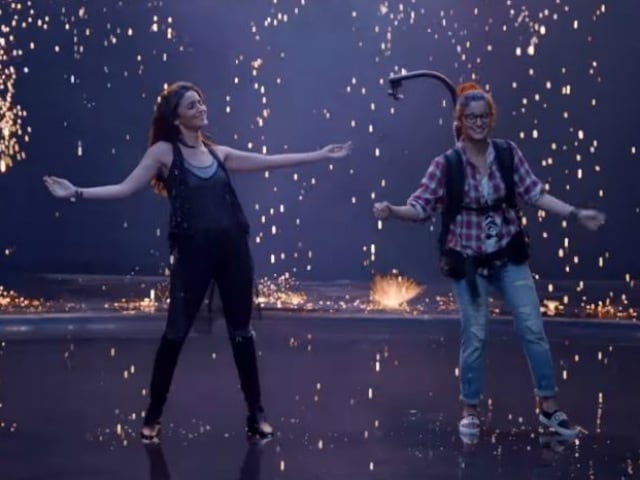 Actress... umm... actress-singer Alia Bhatt creates double the magic on screen in the reprised version of Ae Zindagi Gale Laga Le - the song which also featured in Alia's Dear Zindagi, co-starring Shah Rukh Khan. Originally composed by Ilaiyaraaja and with lyrics by Gulzar, Ae Zindagi Gale Laga Le was part of 1983 movie Sadma. The first version of the renewed Ae Zindagi Gale Laga Le is courtesy Amit Trivedi and released in November. This time, it's Alia times two - she is singing, dancing and filming - in Ae Zindagi Gale Laga Le Take 2. Alia Bhatt and Shah Rukh Khan's Dear Zindagi released on November 25.
Alia plays aspiring cinematographer Kaira in Dear Zindagi and Shah Rukh Khan's character, Dr Jehangir Khan, is her life counsellor and helps Alia navigate through the ups and downs. Alia, who struggles with her career and her personal relationships in the film, stars in dual roles in the song. Kaira, who is dressed for work in baggy denims, tee and shirt with hair tied in an unkempt bun, is filming a sequence with her alter-ego - a chic and stylish Alia Bhatt.
In the end, the two versions of Alia meet, shake hands and even let their hair down to the beats of the song. Alia Bhatt's version has also been composed by Amit Trivedi.

Meanwhile, Alia and Shah Rukh's film opened to mixed reviews. Dear Zindagi has recently been accused of being copied from TV show Being Erica, which aired on CBC in 2009. Director Gauri Shinde strictly denied the allegations and said: "Dear Zindagi is a deeply personal film. There is only one thing it borrows from, that's my life. There are a million films and serials with therapists like there are with doctors. Just because there is a doctor in a film does not mean it borrows from another film with a doctor." Being Erica also tracked the story of a young woman and a psychiatrist.
Dear Zindagi is Alia Bhatt and Shah Rukh Khan's first film together. The slice-of-life film also stars Ira Dubey, Angad Bedi, Kunal Kapoor and Ali Zafar.