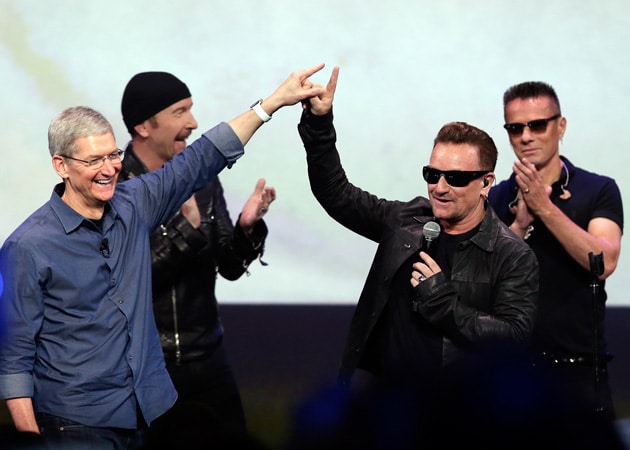 Apple CEO Tim Cook, left, greets Bono from the band U2 after they performed at the end of the Apple event. (Image courtesy: AP)

Surprise! U2 just put out a new album, and the renowned rock band is giving it away for free to iTunes users.

Surprise! U2 just put out a new album, and the renowned rock band is giving it away for free to iTunes users.

U2 made the unexpected announcement on Tuesday at Apple's unveiling event in Cupertino, California. All customers with iTunes accounts could download the 11-song Songs of Innocence for free.

There was much speculation over whether the band would release an album earlier this year when news leaked about the band potentially postponing the highly anticipated new LP's release to 2015. (Music Review: No Surprise, U2's Songs of Innocence Shines)

The Irish band played at Apple's event and CEO Tim Cook announced the new album would be given to the company's 500 million iTunes users. A news release says the album will be released to everyone else on October 14.

Surprise albums are unusual and free albums even more so, but there are recent examples of both.

Beyonce dropped her self-titled LP as a surprise on iTunes in December and it became one of the top-selling albums of 2014. Others, like Kid Cudi and Wolfmother, released surprise albums this year to little notice. Tom Petty gave away his new album with the Heartbreakers for free with purchase of a concert ticket.

A news release says Songs of Innocence is an exploration of U2's influences from the 1970s and '80s with themes of "home and family, relationships and discovery." The album is produced by Danger Mouse with Paul Epworth, Ryan Tedder, Declan Gaffney and Flood.