Arijit Singh Will Sing For Tubelight. Then, Salman Khan Takes Over

"Well, I will sing in Tubelight again. But after that, what will happen I don't know. But I will definitely sing because nobody can stop me from singing a song. Phir uske baad kya decision hoga woh toh unke upar hai (referring to Salman). Unki naarazgi kitni hai un pe depend karta hai," said Arijit Singh 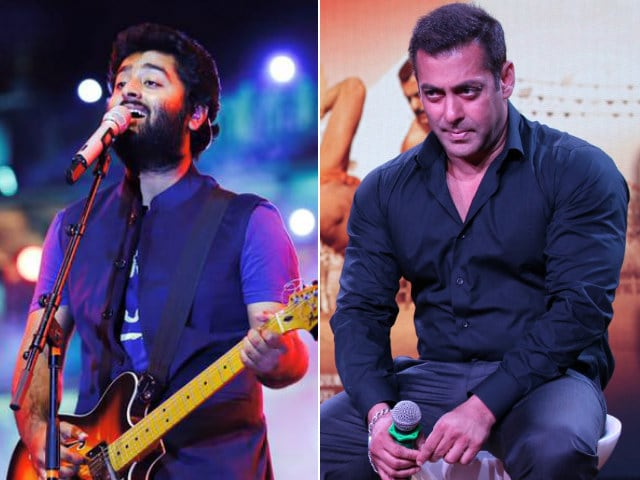 Post his fall-out with Salman Khan a few months ago, singer Arijit Singh says he will "definitely" sing a song in the actor's next but whether the track will be retained is not in his hands.
In May, Arijit posted an apology to the Dabangg actor on Facebook for reportedly offending Salman at an award function three years ago.
The singer had requested Salman to retain his version of a song in Sultan. However, singer Rahat Fateh Ali Khan's version was released from the movie.
Arijit will now sing a track in Kabir Khan's upcoming film Tubelight, starring Salman.
When asked about it, Arijit told PTI, "Well, I will sing in Tubelight again. But after that, what will happen I don't know. But I will definitely sing because nobody can stop me from singing a song. Phir uske baad kya decision hoga woh toh unke upar hai (referring to Salman). Unki naarazgi kitni hai un pe depend karta hai," he said.
The 29-year-old Tumhi Ho singer said he has not spoken to the Bajrangi Bhaijaan star after the controversy, but hopes to do so in the future.
"No, I didn't speak to him. I didn't get a chance to speak to him. May be, I'll get a chance someday and then I will but I don't think he takes these things that seriously. Everybody else made the matter serious," he said.
Arijit also insists that there are no ill feelings between the two and that the 50-year-old actor does not even pay heed to such things.
"There is no ill-will from his side either. He has a lot of work in his life. He is not bothered about such things. He works so hard and makes these films. We are entertained. Look at Sultan. It has created so much awareness about a lot of things. He has got nothing to do with this silly small thing. Baaki logo ko padi hai, unko (Salman) nahi," he said.
The song Jag Ghoomeya from Sultan was initially reportedly recorded by Arijit, but it was re-recorded in Rahat Fateh Ali Khan's voice. Salman also sang another version of it which was not incorporated in the film but was released separately.
When asked if he was sad about it, Arijit said more than missing on being part of the Ali Abbas Zafar film, he lost out on a good song.
"Of course, I was sad. Not because I couldn't be a part of Sultan, but the song is really very good. How Rahat Fateh Ali Khan has sounded in that song, there is no doubt about it," he said.
"That song will obviously make me feel sad every time I will think about it. But no issues, I'll move on. When the song was released, I was singing it throughout. It is such a nice song. It is very rare that songs like these are made," he added.
The singer, meanwhile, has sung three songs in Emraan Hashmi's Raaz Reboot and is excited about it.