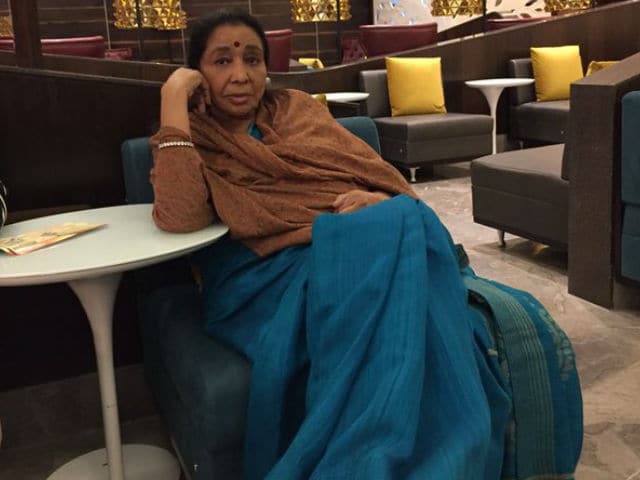 This image was posted on Twitter by Asha Bhosle

Did you know that Asha Bhosle won the Filmfare Best Singer award of 1974 for a playback song that did not figure in the movie at all?
The award was for Chain se hum ko kabhi aap ne jeene na diyaa, the last song she sang for composer O P Nayyar which was supposed to be used in the movie Pran Jaye Par Vachan Na Jaye.
This interesting fact figures in music historian Raju Bharatan's new book Asha Bhosle: A Musical Biography published by Hay House.
He also says in the book that soon after her marriage to Ganpatrao Bhosle, Ashaji wanted to give up singing and just be a housewife. "All that I sought was to keep the house and play mother to my firstborn - Hemant. But my husband would not hear of my giving up the mike. He forced me to continue singing. Left to myself, I would have definitely quit," the author quotes Ashaji as saying.
Of the aforementioned award-winning song, he says, "In fact I don't think that this feat of hers has been matched by any singer in the world."
He terms the song as a torch song recorded as we were set to move into the Asha-OP 'cut-off' month of August 1972. "It was recorded during an hour in which both Asha Bhosle and OP Nayyar knew that they were through. Yet, at the end of it all, there was always in this remorse that you could not retrieve," he writes.
Soon Ashaji and Mr Nayyar parted ways after an association of 15 years.
The song, written by S H Bihari, was first played in November 1973 on Radio Ceylon and the film which was supposed to picturise it was released on January 18, 1974. When the Filmfare awards ceremony came to be held in March 1975, Ashaji had no motivation left to receive her prize.
Mr Bharatan cites another anecdote connected with the episode.
Anticipating Ashaji's absence, Mr Nayyar in a "malicious manoeuvre calculated to rile her" called the Filmfare editor to say that he would be happy to receive the award as the song's composer on "behalf of his best lady singer ever."
Mr Bharatan's book is woven mainly around Ashaji's musical journey with Mr Nayyar, S D Burman and R D Burman.
(Except for the headline, this story has not been edited by NDTV staff and is published from a syndicated feed.)