Halka Halka: The video begins with Ayushmann and Amy flipping through the pages of an album full of old, worn out pictures 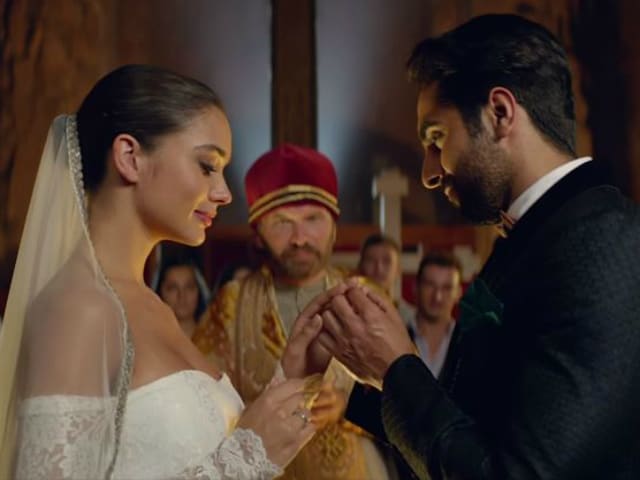 Ayushmann Khurrana, Amy Jackson in a still from Halka Halka

Actors Ayushmann Khurrana and Amy Jackson are the stars of the new version of Yeh Jo Halka Halka Suroor Hai, originally sung by celebrated classical singer Nusrat Fateh Ali Khan. The re-worked version has been sung by Rahat Fatel Ali Khan, the late singer's nephew. The slightly changed lyrics have been composed by Rashmi Virag while credits for composing the recent rendition go to Abhijit Vaghani. Titled Halka Halka, the new song documents the love story of a married couple played by Ayushmann Khurrana and Amy Jackson. The video of Halka Halka has extensively been shot in Georgia. Produced by T-Series, the single was released on December 1.
The video of Halka Halka begins with Ayushmann and Amy flipping through the pages of an album full of old, worn out pictures. Amy points at a postcard-like picture and the video takes a different turn then onwards. Soon, Ayushmann chances upon a magic cabinet, which he enters unknowingly and is transported to the world of his wife's grandparents. He is taken as a slave until set free by the queen himself, played by Amy.
A set of adventures and hurdles later, Ayushmann returns to the present time only to find that time had stood still for him. Ayushmann flicks his fingers and reunites with his wife Amy.
Watch the video of Halka Halka here:

Ayushmann Khurrana, 32, made his Bollywood debut with 2012's Vicky Donor and was last seen in 2015 film Dum Laga Ke Haisha. Ayushmann is also a successful singer and has churned out numbers like Pani Da Rang, Saddi Gali, Mitti Di Khusboo, Yahin Hoon Main and Tu Hi Tu. Amy Jackson, 24, made her debut in films with Tamil movie Madrasapattinam. In Bollywood, she has starred in Singh Is Bliing and Freaky Ali.