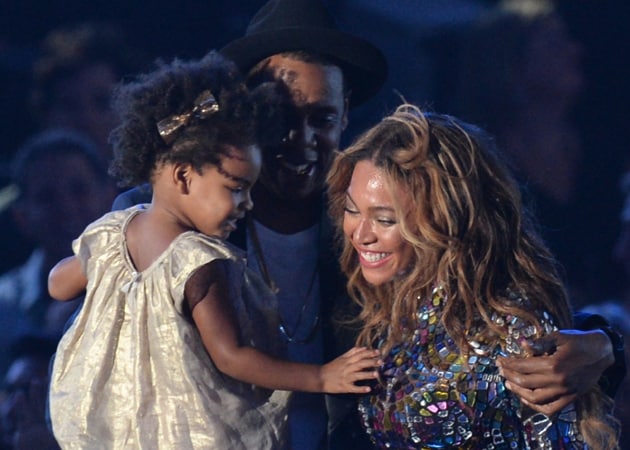 Beyonce on stage with husband Jay Z and daughter Blue Ivy at the 2014 VMAs. Image: AFP

Beyonce closed the MTV Video Music Awards with an epic nearly 20-minute performance, and tears streamed down her face as she was joined onstage by her beaming husband and daughter.
On August 24, Beyonce sang and danced in a metallic leotard while Blue Ivy and Jay Z watched from their seats as the diva declared: "MTV, welcome to my world."
As Beyonce accepted the Michael Jackson Video Vanguard award, the VMA's version of a lifetime achievement award, at The Forum in Inglewood, California, she kissed her daughter and husband Jay Z, who called her the "greatest living entertainer." The duo won best collaboration for the hit Drunk In Love.
"I have nothing to say but I am filled with so much gratitude," she told the cheering crowd as they chanted her name repeatedly. Her performance easily outdid her competition throughout the night, though Beyonce lost video of the year, which instead went to Miley Cyrus who let a homeless man accept her award.
It was in sharp contrast to the 2013 VMAs, when Miley twerked and danced shockingly onstage.
"Thank you all, my name is Jesse and I accepting this award on behalf of the 1.6 million runaways and homeless youth in the United States who are starving, lost and scared for their lives right now. I know this because I am one of these people," he said, as a teary Cyrus looked on.  "Though I may have been invisible to you in the streets, I have a lot of the same dreams that brought many of you here tonight."
Miley's decision to let someone else accept her award to promote a cause was reminiscent of Marlon Brando's 1973 Academy Awards best actor win, when he gave a Native American activist the stage rather than accept his Oscar trophy.
The two-hour show was tamer than past VMAs: the most shocking moment was Nicki Minaj's rump-shaking during her performance of Anaconda in the show's first minutes, and her wardrobe malfunction when she joined Ariana Grande and Jessie J for Bang, Bang.
"It felt amazing to open the show, and we ran out of time getting the dress zipped up," Minaj said backstage.
Taylor Swift was a crowd favourite when she performed her new single Shake It Off in shimmery, fringed shorts and a crop top. She got to the top of the stage, and as her tuxedoed male background dancers stood with their arms wide open waiting for Swift to jump she said,
"One second. I don't care if it's the VMAs. I'm not jumping off there."
She continued: "It's all kinds of people getting bitten by snakes. Dangerous." Ariana, who held hands with rapper Big Sean backstage, kicked off the show with a performance of her EDM hit, Break Free in a Beyonce-inspired leotard. The 21-year-old won best pop video for her smash single Problem, but lost best female video to Katy Perry, who won for Dark Horse.
Katy sported a figure-hugging denim dress and was joined by Riff Raff in a coordinating outfit, mirroring Justin Timberlake and Britney Spears at the 2001 American Music Awards.
The night also featured a serious social message: Rapper-actor Common held a moment of silence for Michael Brown, the unarmed 18-year-old who was fatally shot by a police officer on August 9, before he presented the award for best hip-hop video.
"Hip-hop has always been about truth and has been a powerful instrument of social change, from Melle Mel to Public Enemy to Kendrick Lamar," Common said. "Hip-hop has always been presented a voice for the revolution."
Later, a 15-second spot aired alluding to the shooting in Ferguson, Missouri, urging viewers to take action to eliminate bias.
"Not everything that is faced can be changed; but nothing can be changed until it is faced," a quote by author James Baldwin read on the screen.
Lorde won best rock video for Royals and Ed Sheeran won best male video, beating out Pharrell, Eminem, John Legend and Sam Smith, who was a show highlight with his smoldering performance of his hit Stay With Me.
Iggy Azalea and Ora appeared onstage as spider women when they performed their hit Black Widow, as Taylor Swift, Lorde and Charli XCX danced and sang along.