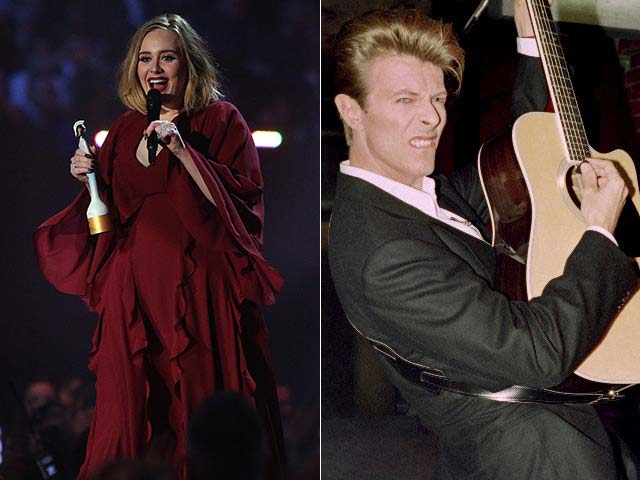 Astronaut Tim Peake presented Adele with a Global Success Award for her record-breaking latest album 25, which also won the Album of the Year Award while Hello won the Best Single and she was also named Best Female Solo Artist. Adele took to the stage in tears, saying: "My kid is going to think I'm so cool."

Astronaut Tim Peake presented Adele with a Brit Award from space on February 24 as the singer swept the board at the annual British music awards rendered sober this year by the death of David Bowie.
"We're all huge fans up here," Tim said in a recorded message from the International Space Station, adding that the superstar singer had "taken the world by storm."
He presented Adele with a Global Success Award for her record-breaking latest album 25, which also won the Album of the Year Award while Hello won the Best Single and she was also named Best Female Solo Artist.
Adele took to the stage in tears, saying: "My kid is going to think I'm so cool."
"Not bad for a girl from Tottenham who doesn't like flying and getting global success. And Tim Peake, I love you. I hope you're okay and not too hungry. Bye," added Adele.
The Londoner had earlier used an acceptance speech to publicly support Kesha, the US pop star who accused her producer of allegedly abusing her for years.
In another emotional moment, Gary Oldman and Annie Lennox paid a heartfelt tribute to David Bowie, the British rock legend who died unexpectedly from cancer last month.
"David, you were mortal but your potential was superhuman and your remarkable music is living on. We love you and we thank you," Gary Oldman said.
Rumours of an all-star tribute act proved wide of the mark, with Mr Bowie's old band instead taking to the stage to perform Life on Mars with Lorde, an artist he had championed.
Dedicated to refugees
Coldplay opened the night and took home their fourth Brit award for best group for their seventh and possibly last LP, A Head Full of Dreams.
Lead singer Chris Martin dedicated the award to "all the young men and women musicians in refugee camps around the world. They could be us and we could be them. So, we send them our love and thank you so much for giving us our job."
Meanwhile Justin Bieber, who performed with Best British Solo Artist James Bay, was named Best International Solo Artist.
Rihanna, who delayed the start of her world tour and missed the Grammys last week due to illness, shook up London's 02 Arena with a rendition of her new song Work with a special appearance by Drake.
Making British music boring
The Brit Awards unashamedly celebrate commercial success, but in an echo of the storm surrounding the Oscars, organisers have this year come under fire for the scarcity of black or ethnic minority nominees.
British rapper Stormzy, who won best Grime act at the Mobo (Music of Black Origin) awards in 2014 and 2015, who had a top 10 hit last year, said that he was disappointed that his kind of music was not celebrated.
Laura Mvula, a soul singer shortlisted for the critics' choice award at the 2013 Brits, told the BBC she would not be attending this year because of "the diversity issue."
Organisers said that the Brits tended to honour artists "who have achieved the very highest levels of chart success," but acknowledged that it might be time to take a "fresh look" at how the nominees are chosen.
They announced plans for a new advisory committee to help them more effectively acknowledge diverse talent.(Also Read: BRIT Awards 2016: Complete List of Winners)