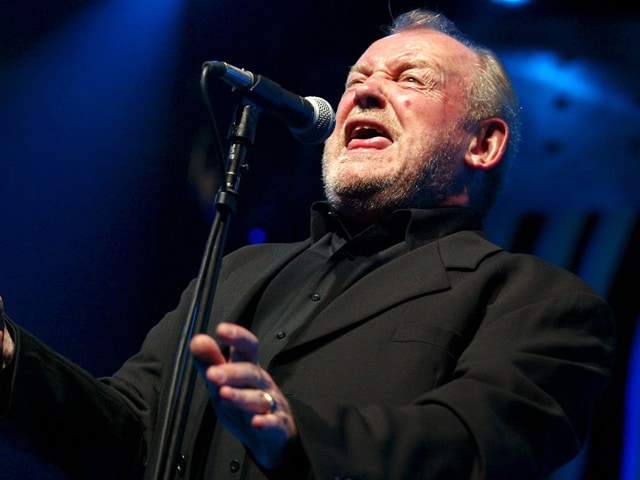 Joe Cocker, the raspy-voiced British singer known for his frenzied cover of With a Little Help From My Friends, the teary ballad You Are So Beautiful and a contorted performing style uncannily parodied by John Belushi on Saturday Night Live, has died. He was 70.
His London-based agent, Barrie Marshall, said Mr Cocker died on Monday of lung cancer in Colorado, where he has lived for the past two decades.
Mr Joe Cocker, an interpreter more than a writer, became a star through his dazzling transformation of the Beatles' With a Little Help From My Friends. Featuring a gospel-styled arrangement and furious call and response between him and the backup singers, the song became a No 1 hit in England and the highlight of his characteristically manic set at the Woodstock festival in 1969.
In a statement on Monday, Paul McCartney remembered hearing Cocker's cover of the song he and John Lennon co-wrote for Ringo Starr and finding it "just mind blowing," a "soul anthem."
"I was forever grateful for him for doing that," he said. "I knew him through the years as a good mate, and I was so sad to hear that he had been ill and really sad to hear today that he had passed away."
Mr Cocker's 'Mad Dogs & Englishmen' tour and travelling party of 1970, featuring Leon Russell and numerous top session musicians, produced a film and a recording that went gold. But future success was more sporadic, and Cocker suffered from both drug and financial problems.
He had a top 10 hit in 1975 on You Are So Beautiful, his voice cracking on the final, emotional note, and won a Grammy Award in 1983 for his Up Where We Belong duet with Jennifer Warnes, the theme of the movie An Officer and a Gentleman.
His cover of Bryan Adams' When the Night Comes was featured in the film An Innocent Man and became a top 20 single in 1990.
Mr Cocker, who received an Order of the British Empire in 2011 for his contribution to music, released 40 albums and continued to tour after the hits stopped. His other popular covers included Feelin' Alright, The Letter and Cry Me a River, a song previously recorded by one of his greatest influences, Ray Charles.
His voice, at times so worn it seemed in danger of shredding, was just one part of his legend. No Cocker fan could forget his intense, twitchy stage presence, his arms flailing, his hips stretching, his face contorting. Among those watching were Belushi, whose expert imitation became a feature of his early National Lampoon shows and eventually a part of popular history when he joined Cocker in 1976 for a duet of Feelin' Alright on Saturday Night Live.
Years later, Mr Cocker told The Associated Press' Mary Campbell that he was playing an imaginary piano and air guitar while singing - the elements that contributed to this unique style.
"That was the frustration of not being able to play, really," he said.
Mr Joe Cocker was born in Sheffield, South Yorkshire, and was singing with local bands by the time he was a teenager. His early groups included Vance Arnold and the Avengers and the Grease Band, which backed him on With A Little Help From My Friends.
He moved to Crawford, Colorado, a town of fewer than 500 people, in the early 1990s. He and his wife, Pam, ran a children's educational foundation - the Cocker Kids Foundation - that raised funds for the town and schools, and ran the Mad Dog Cafe for several years in town, said Tom Wills, publisher of The North Fork Merchant Herald, a local community newspaper.
Wills said Mr Cocker bought about 40 acres of property and built a hillside mansion - which he called Mad Dog Ranch - when he moved to Colorado.
A group of his friends gathered on Monday at community radio station KVNF to play his songs.
"He had a long battle with cancer. We're trying to do a little tribute for him," said Bob Pennetta, a real estate agent and board member of the Cocker Kids Foundation.
Mr Cocker is survived by his wife, Pam; a brother; a step daughter and two grandchildren. A private memorial is planned. In lieu of flowers, memorial donations may be made to The Cocker Kids' Foundation, PO Box 404, Crawford, CO 81415.