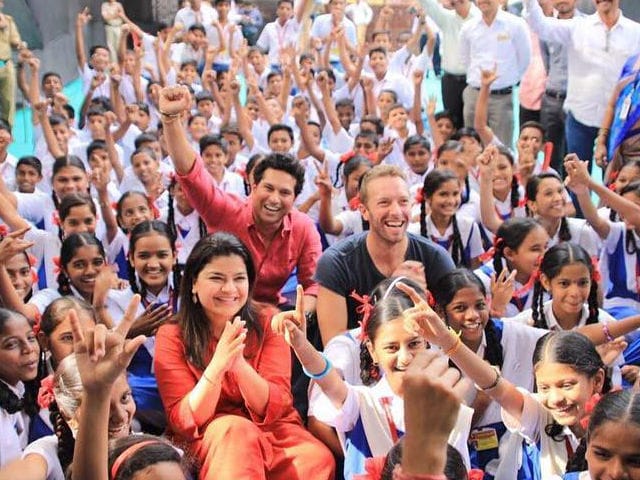 Chris Martin, Coldplay and Global Citizen Festival - three words that have taken India by storm. As of now, Indians are converging in Mumbai to attend the coveted Global Citizen Festival which has performances listed by A-list Bollywood celebs like Amitabh Bachchan, Shah Rukh Khan, AR Rahman, Farhan Akhtar and Shraddha Kapoor but India has its eyes (and ears) set on Coldplay's frontman Chris Martin, who will perform tonight at the MMRDA grounds in Mumbai's Bandra-Kurla complex.
But before the super Saturday night, we spotted Chris touring Mumbai with ace cricketer Sachin Tendulkar. They visited Shri Gadge Maharaja Vidyalay school and interacted with the children there. Chris played unplugged for the children, even before the rest of India could see him perform:

Then, Chris played cricket with Sachin and children and it's a moment to remember, always:

It's safe to say that the decks have been cleared for Coldplay and Mumbai, ready or not, here they come. On Friday, the Bombay High Court refused to stay the concert after a petition was filed by activists challenging the Maharashtra government's decision to waive entertainment tax.
Chris Martin and Coldplay have visited India at least twice before but have never performed. Last year, Chris played an impromptu gig in a Delhi nightclub which much of the city missed. He later returned to India with his band to shoot the music video of their song Hymn For The Weekend in Mumbai. Actress Sonam Kapoor featured briefly in the video, alongside no less a person than Beyonce.
Earlier this year, a Coldplay concert in Berlin was packed with actors from Bollywood - Deepika Padukone, Alia Bhatt, Sonam Kapoor and Malaika Arora Khan were all spotted.
Months ago, Twitter went into meltdown after tickets to the concert were rumoured to be priced at Rs 25,000. Officials later confirmed that this was untrue - most tickets would be free and would need to be 'earned' by participating in social work. The portion of tickets that were available at a price were sold out within minutes online, with virtual queues of over an hour.
Among the celebrities, Aamir Khan will not attend because he will be in Balali, Haryana, for the wedding of wrestler Geeta Phogat, whose father Mahavir he plays in new film Dangal.