Chris Martin's Secret Delhi Jam. Heartbreak For Those Who Weren't There 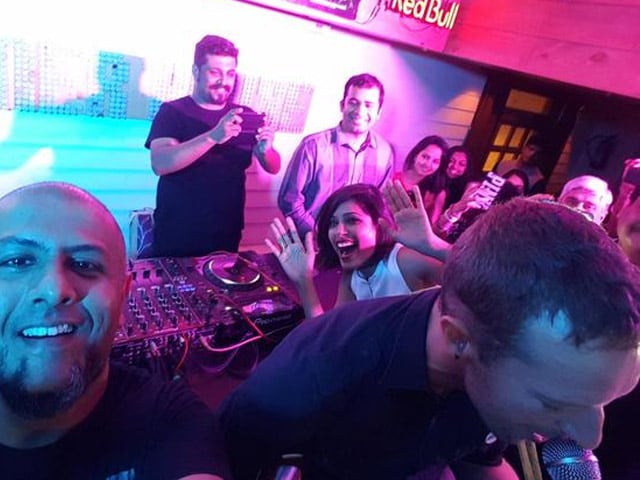 This image was posted on Twitter by Vishal Dadlani

Coldplay frontman Chris Martin randomly walked into Delhi's Summer House bar on Wednesday and performed an impromptu set. Just like that.
He really did. His set included Viva La Vida, Paradise and Fix It. Here:
Vishal was on stage with Chris Martin. It was apparently "More jam, less gig. Chris did all the work, though. People were going apeshit."
Also present - actress Frieda Pinto, musician Ragu Dixit and the guys from comedy collective AIB.
Here, in tweets and Instagram posts, is exactly what went down. There's also a bit of video:


Ok, I just got off stage from standing around while Chris Martin of Coldplay did an impromptu set. Holy wow!! pic.twitter.com/Yc0RWIv9Mr

I can now officially say I introduced Chris Martin on for a set. Holy. Shit.

From someone in the 'apeshit' crowd:


This image was posted on Twitter by @ohchrismartin
The rest of Delhi, who didn't happen to be partying at Summer House that night, has been left heartbroken and bereft:


I sleep for a bit & Chris Martin plays a secret gig at a Delhi bar! I should not sleep incase rockstars invade bars & kill people with swag

This is going to be a sleepless night tonight. CHRIS MARTIN IN DELHI. WTF. To do list : 1. Start going to bars.

CHRIS MARTIN IS IN DELHI OH, MY GOD. I'M CRYING. I HOPE THIS IS A SIGN THAT @coldplay IS COMING TO INDIA. OH GOD PLEASE PLEASE PLEASE.

Of course Chris Martin had to be in Delhi. Of course, because my life just couldn't get more unfair.

CHRIS MARTIN PLAYED A SECRET SET AT SUMMER HOUSE CAFE IN DELHI. THIS IS NOT FAIR.

Timelines on Twitter are now filled with pleas to Chris Martin to come play in their city, like this one:


Hey Chris Martin, you don't know what you're missing by not performing in Mumbai! (Read: PLEASE COME TO BOMBAY AFTER DELHI PRETTY PLEASE!!)


That awkward moment in Delhi when Chris Martin is going home and there's a power failure and there are no lights to guide him home.

Chris Martin and Freida Pinto are in India as goodwill ambassadors for the Global Poverty Project.