Armed with two handguns, ammunition and a hunting knife, the suspect, identified as Kevin James Loibl, shot and fatally wounded the 22-year-old at the city's Plaza Live Theater on late Friday during a meet and greet with fans 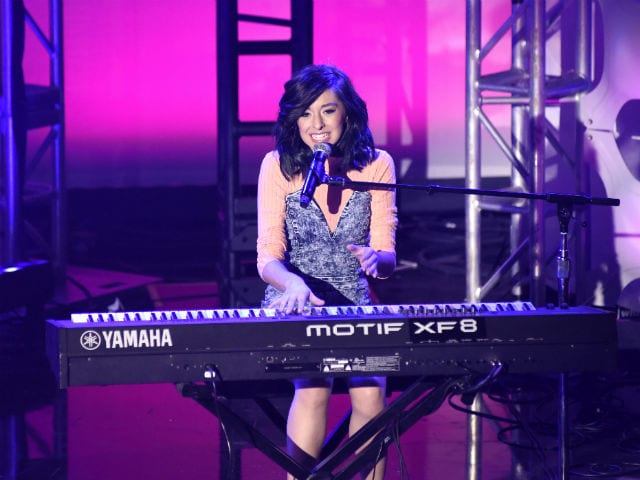 The gunman who killed singer Christina Grimmie, a former contestant on the popular TV show The Voice, travelled to Orlando, Florida, apparently intending to attack her, police said on Saturday.
Armed with two handguns, ammunition and a hunting knife, the suspect, identified as Kevin James Loibl, shot and fatally wounded the 22-year-old at the city's Plaza Live Theater on late Friday during a meet and greet with fans.
Ms Grimmie -- who had performed with the group Before You Exit -- was rushed to the Orlando Regional Medical Center, but died of her wounds.
"The suspect travelled to Orlando, apparently, to commit this crime, and then had plans to travel back to where he came from," Police Chief John Mina told reporters.
But the tragedy could have been far worse had Ms Grimmie's brother Marcus not tackled the suspect as he began shooting. Loibl, a 27-year-old from St Petersburg, Florida, shot and killed himself after shooting Ms Grimmie.
"Her brother Marcus is a hero and possibly saved countless other lives," the Orlando Police Department said in a statement.
There were about 120 people in the venue at the time, it said, adding that the brother was not injured.
Detectives are scrutinizing Loibl's cell phone and computer as they search for a motive.
Police declined to provide many details about the suspect.
Guns snuck past guards
Unarmed security guards at the concert conducted bag checks, police said, but failed to discover the shooter's weapons.
"There are no metal detectors. People are not patted down. They open their bags and authorities and look inside those bags for weapons," John Mina said.
Most people at the event were "young kids," which "isn't a crowd that you would suspect would be carrying guns," he added.
Authorities said that they were trying to determine if the shooter knew Ms Grimmie or was a deranged fan.
The shooting likely adds fuel to the long simmering debate over gun control in the United States, where firearms were used in more than 11,200 murders in 2013, according to the Centers for Disease Control and Prevention.
But past bouts of even more extreme gun violence, including the 2012 killing of 20 school children at an elementary school in Connecticut, have led to little change in a country where the right to bear arms is protected under the second amendment of the US constitution.
'Lost a beautiful soul'
As word of Ms Grimmie's shooting and subsequent death spread quickly on social media, fans posted video clips of her performances, including her cover of Miley Cyrus's Wrecking Ball during a blind audition on The Voice.
A New Jersey native, Ms Grimmie gained a following by singing covers of hit songs in popular videos posted on YouTube.
Ms Grimmie, who competed in the sixth season of The Voice in 2014, released her debut EP Find Me in 2011.
"There are no words. We lost a beautiful soul w/ an amazing voice," the NBC talent show wrote on Twitter.
Selena Gomez tweeted:


My heart is absolutely broken. I miss you Christina pic.twitter.com/KWGwZZlj4t

Selena Gomez's stepfather Brian Teefey, who was Ms Grimmie's manager, opened an account on the GoFundMe crowd sourcing website to raise money for Ms Grimmie's family.
"Words cannot begin to describe the pain I am feeling," Brian Teefey told People magazine.
"Christina was like a second daughter to me. All I wanted to do was assist her in achieving her musical dreams while protecting her from the pitfalls associated with the business," he said.
"I never could have imagined this horrific event being one of the pitfalls needing to be avoided," he added.