Chris Martin said, "What people don't know is that there was another guy that we all met and we all thought was the most talented member, and he was so good that if he had been in our band forever." 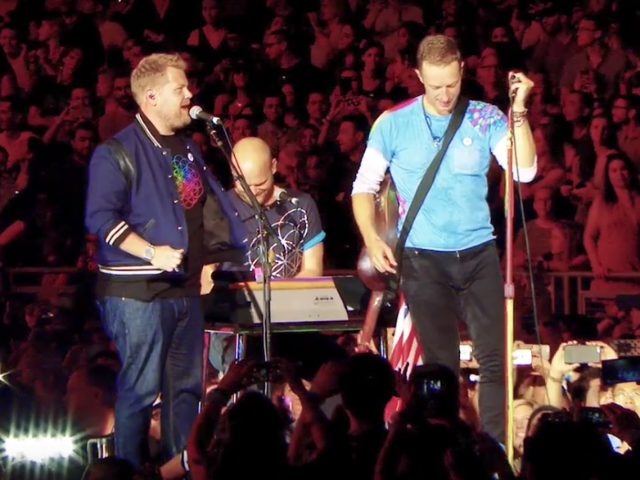 A still from the video posted on YouTube by Coldplay

When it comes to surprises, British rock band Coldplay never ceases to disappoint fans. And true to tradition, headliner Chris Martin gave The Late Late Show's host James Corden a birthday surprise of a lifetime, after the two became friends post Chris' appearance on the latter's famous late-night segment, Carpool Karaoke.
James, who happened to be enjoying the band's concert at the LA Rose Bowl as an audience member on the eve of his 38th birthday, was introduced as an "old band member" whom the band were inviting on-stage to perform a very special Prince tribute.
"What people don't know is that there was another guy that we all met and we all thought was the most talented member, and he was so good that if he had been in our band forever, we'd be the best band you ever knew. But instead he chose to forge his own path," Chris revealed to the crowd.
He added, "But I'm very pleased to tell you that - in honor of Prince tonight because we wanna honor Prince - we managed to convince our missing and best member to come back into the band. You may know him from things like Carpool Karaoke, but we know him as the guy who turned down being in a band with us."

Of course, fans were in for a major treat when James pulled out from backstage to render the classic Nothing Compares 2 U. James claimed to not know how big the concert was when he initially said yes, and that he was visibly nervous about it. Funnily enough, the actor and television celebrity, has a Tony-award winning Broadway show and an Academy Award-nominated musical film to his name.
Despite the nervousness, and after a lot of witty one-liners for the ecstatic audience, James and Coldplay completed their performance. But just as he started leaving the stage, Chris told him to wait as one more surprise was in store - and a giant cake arrived for the 'birthday boy,' who had the honour of having Coldplay sing Happy Birthday to him in front of a crowd of thousands who sang along.
Certainly, a once-in-a-lifetime celebration for James Corden.
Watch the full performance here: