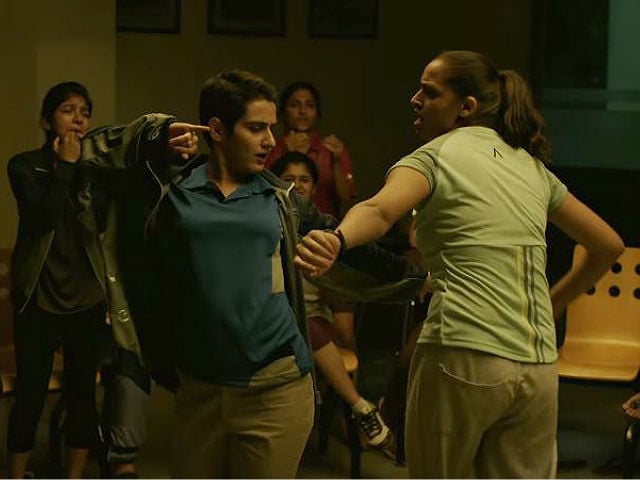 Folks, the makers of Dangal have released a new song from the film which is pure melody. Dangal is based on wrestler's Mahavir Singh Phogat's journey in the sport and beyond when he coaches his daughters Geeta and Babita. The song, titled Gilehriyaan, shows what happens when Geeta (played by Fatima Sana Shaikh) joins a wrestling camp in the city, far from her Haanikaarak Bapu's approach. Mahavir and Geeta reach the stadium and she's enamored by the place. However, Mahavir only wants a good coach for his daughter. Geeta explores some new facets of her life - like kindling a romance through glances - and some old which were revoked by her father - like eating golgappas.
Geeta enjoys life with her colleagues, watches films, shops and eats whatever she likes. She loves her new life but back home, her Haanikaarak Bapu is missing her - totally adorable. He tries to keep a check on her well-being but Geeta has no time for her old man. In addition, Mahavir is seen prepping his second daughter Babita, who is eager to join Geeta in the city, but then haanikarak bapu reminds her that he's still her coach.
Video: Watch Geeta's new adventures in Dangal's song Gilehriyaan:

Gilehriyaan has been composed by Pritam, written by Amitabh Bhattacharya and sung by Jonita Gandhi.
Aamir Khan, 51, plays wrestler Mahavir Phogat - both old and young versions - in the Nitesh Tiwari-directed film. Recently, the makers also shared Aamir Khan's 'fat to fit' journey for the film. Aamir weighed 97 kilos when he played the older version of Mahavir Phogat and then brought down his weight to 70 kilos for the younger part.

Dangal releases on December 23 and also stars television actress Sakshi Tanwar and Sanya Malhotra as Babita Phogat.
Aamir Khan is currently working on Thugs of Hindostan, in which he co-stars with Amitabh Bachchan. The film, directed by Vijay Krishna Acharya, is backed by Yash Raj Films, with whom he's worked before in Dhoom: 3.