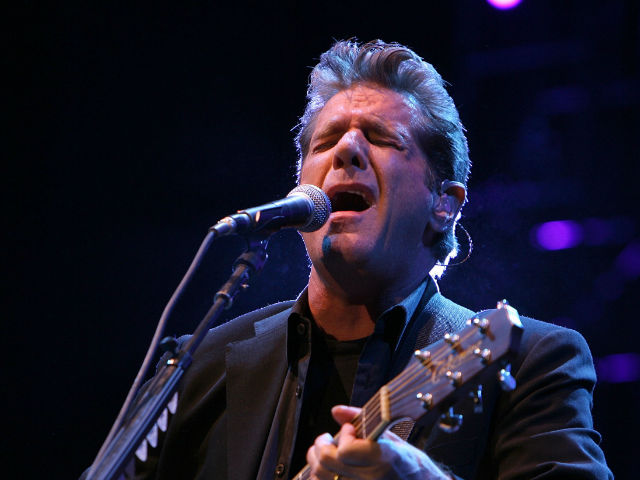 "It is with the heaviest of hearts that we announce the passing of our comrade, Eagles founder, Glenn Frey on January 18th, 2016. Glenn fought a courageous battle for the past several weeks but, sadly, succumbed to complications from Rheumatoid Arthritis, Acute Ulcerative Colitis and Pneumonia"

Guitarist Glenn Frey, who helped make The Eagles one of the most successful acts in US rock history with hits such as Hotel California, died Monday. He was 67.
"It is with the heaviest of hearts that we announce the passing of our comrade, Eagles founder Glenn Frey, in New York City," the Grammy Award-winning band wrote on its website.
Mr Frey died of complications from rheumatoid arthritis, acute ulcerative colitis and pneumonia, The Eagles said.
"We are all in a state of shock, disbelief and profound sorrow," fellow Eagle Don Henley said in a statement. "He was the spark plug, the man with the plan. He had an encyclopedic knowledge of popular music and a work ethic that wouldn't quit," he added.


It is with the heaviest of hearts that we announce the passing of our comrade, Eagles founder, Glenn Frey, in New York...

The Eagles, fronted by Mr Frey and drummer-vocalist Henley, dominated the American rock charts throughout the 1970s with hits including Take It Easy, One of These Nights and Hotel California - songs that endure as cover-band classics to this day.
The Eagles pioneered the West Coast sound of laid-back, country-tinged rock that dominated early 1970s American pop and saw a changing cast of core members throughout the decades. (Also Read: Glenn Frey, 'The One Who Started it All' With The Eagles)
The Eagles' 1975 greatest hits collection has sold more than 29 million copies in the United States, more than any album except Michael Jackson's Thriller, according to the Recording Industry Association of America.
The Eagles had been due in December to receive the prestigious Kennedy Center Lifetime Artistic Achievement award but the band said it would postpone its appearance by a year due to Mr Frey's health.
Triumphs And Tensions
Mr Frey was born in Detroit on November 6, 1948, the son of a machinist.
The rock group was founded in the early 1970s and inducted into the Rock and Roll Hall of Fame in 1998.
Its six Grammys range from Record of the Year in 1977 for Hotel California to Best Pop Instrumental Performance in 2008 for I Dreamed There Was No War.
The Recording Academy, which presents the Grammys, in a statement called Mr Frey's death "a huge loss for the music community," saying he was "an integral part of one of the most storied bands in pop history."
The Eagles split following a 1980 political benefit concert that exposed disagreements within the band.
The tensions had been exacerbated by drugs and alcohol, although the band members did not have the same bad-boy image as some of their peers.
"We weren't the Stones, but we weren't The Osmonds either. Somewhere in between," Mr Frey told CBS television's 60 Minutes in 2007, referring to the notoriously rough-living Rolling Stones and the Mormon family singers The Osmonds.
Pressed on where The Eagles stood on the spectrum, he replied: "Closer to the Stones than The Osmonds - that's right."
Mr Frey stayed cryptic until the end about the meaning of Hotel California, which was generally seen as a wide-eyed account of the state's excesses by two transplants but has long inspired elaborate theories on potential alternative meanings.
In a 2003 interview with the San Francisco Chronicle, Frey said that vagueness was the "primary tool of songwriters."
"'I've seen fire and I've seen rain,'" Mr Frey said, quoting a line from contemporary James Taylor.
"What the hell does that mean? But it works, it means whatever the listener wants it to mean."
Perfectionist Until End
Mr Frey and Henley pursued successful solo projects in the 1980s but reunited as The Eagles in 1994.
The Eagles last performed together in July last year in Louisiana, capping two years of touring that followed a documentary on the band.
Mr Frey "was like a brother to me; we were family, and like most families, there was some dysfunction," Henley said.
"The bond we forged 45 years ago was never broken, even during the 14 years that the Eagles were dissolved," he added.
The band's website added: "Words can neither describe our sorrow, nor our love and respect for all that he has given to us, his family, the music community and millions of fans worldwide."
Voices from across the music community chimed in to wish Mr Frey farewell.


Sad day. My heart goes out to Cindy and the members of the Eagles and his entire family of friends and fan who loved him so. #RIPGlennFrey

Fellow Detroit-born rocker and frequent collaborator Bob Seger told Billboard magazine that Mr Frey was a perfectionist and the driving force behind The Eagles.
He said that every time he saw Mr Frey in recent years he would tell him, "'Isn't it amazing, Bob, we're still doing this at our age? I am so grateful that these fans keep coming out.'"