BookMyShow began the first phase of ticket sales for the Global Citizen Festival India 2016, to be headlined by British rock band Coldplay, at 12 pm on Thursday, and the tickets were sold out in record time 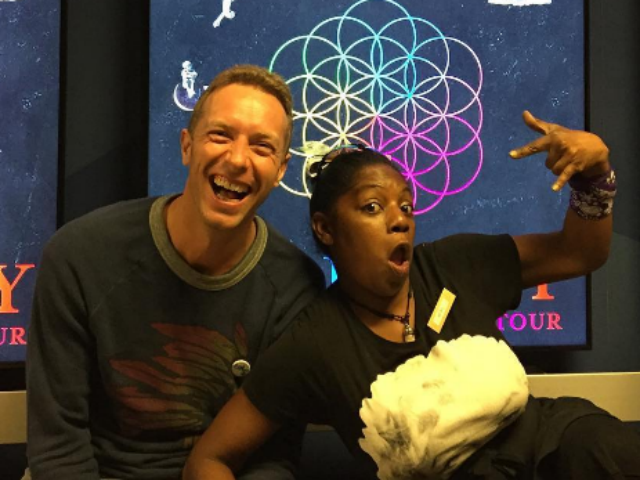 Yes, you can 'earn' free tickets to Coldplay by enrolling in sanitation and education campaigns but paid tickets went on sale on Thursday for those who'd rather fork out cash. Limited early bird tickets priced at Rs 5,000 sold out in record time after they began selling at 12 pm, and the next category of Rs 7,500 were almost sold out at the time of writing this.
The tickets to the Global Citizen Festival India 2016, which Coldplay is headlining, are available on BookMyShow.
There was an hour-long queue for tickets, as the screenshot below shows. With almost 40,000 people ahead, infinite patience and broadband connection is the need of the moment. 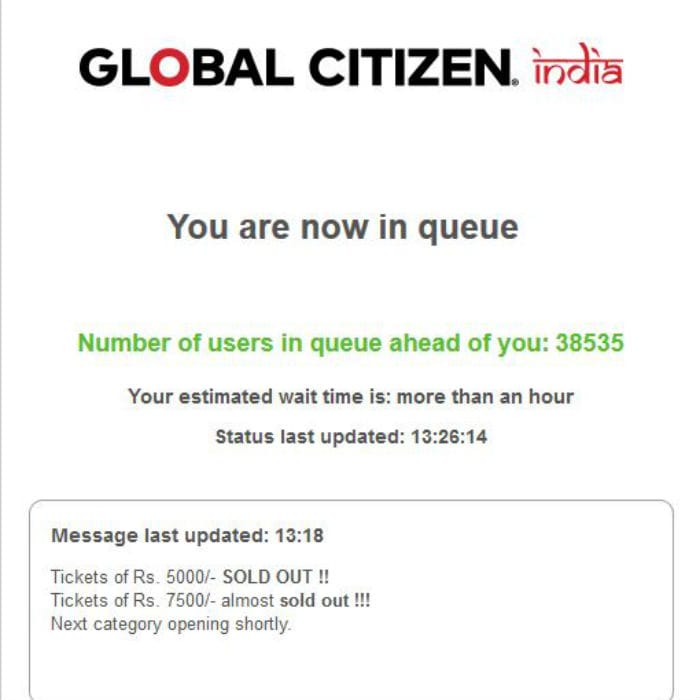 Much has been said about the festival and the line-up ever since it was formally announced that Coldplay would play alongside other artistes like hip-hop legend Jay Z. Bollywood stars Aamir Khan, Ranveer Singh, Katrina Kaif, Farhan Akhtar, Kareena Kapoor Khan, Arjun Kapoor, Shraddha Kapoor along with music maestro A R Rahman, composers Shankar-Ehsaan-Loy and singers like Arijit Singh and Monali Thakur will also perform.
Before the free tickets were formally announced last week, reports suggested that the price tag would begin at a hefty Rs 25,000 and go upto Rs 5 lakhs. Twitter was enraged.
A majority of tickets to the event can be earned by fans for free by engaging in causes and completing 'Action Journeys' but BookMyShow, the exclusive partner for the event, will sell tickets across four phases through its website and app. Fans have been visibly excited about purchasing tickets, if need be, at the stipulated price.
However, Twitter is still incensed that tickets are now sold out:


@bookmyshow@coldplay I was on the page since 11;58, and the early bird was already sold out. Care to explain?

Some seriously questioned their priorities:


Took a day of from studies to book Coldplay tickets and 5k tickets sold out. FML FTS

Some are still discovering the sale in the first place:

Others haven't lost their sense of humour:

And some have given in to fate and the Almighty:


Not paying a penny for Coldplay tickets because I am pretty confident I'll be able to watch the whole show on Instagram, Facebook & Snapchat

But there's still hope. The second phase of ticket sales will go live immediately after the first phase is completely sold out. Ticket sales for the subsequent phases will go live a few days after that.
There are also limited hospitality tickets which will be sold through BookMyShow. These are special tickets which will offer varied benefits including food and beverage options and the early bird prices for these will start at Rs 15,000 per ticket. So keep calm and carry on.
Coldplay, particularly frontman Chris Martin, has formed a recent bond with India. Last year, Chris played an impromptu gig in Delhi which most of the city missed. He later returned to India on official business. Coldplay shot part of the video for the song Hymn For The Weekend in Mumbai - Sonam Kapoor featured with Beyonce.
Making its maiden appearance in India, the Global Citizen festival is a collaboration between The Global Education & Leadership Foundation and Global Citizen. It will be held at the MMRDA grounds in Mumbai on November 19.