Farhan and Shraddha head bang. Purab Kohli is enthusiastic at the drums. Arjun Rampal and Shashank Arora are strumming their guitars hard but where's the Magik? 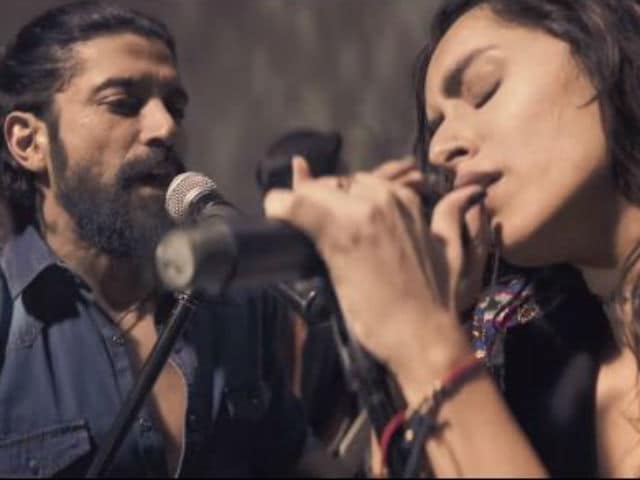 The makers of Farhan Akhtar and Shraddha Kapoor's Rock On 2have released a new song where they revisit the title track of the 2008's film.
And to be honest, it is nothing like the iconic number. It seems that the passion, vigour and newness of Rock On!! can't be replicated.
Farhan and Shraddha head bang. Purab Kohli is enthusiastic at the drums. Arjun Rampal and Shashank Arora are strumming their guitars hard but where's the Magik?
However, the visuals show the band capturing the maxim city with their performance. Their faces are everywhere-on the skyscrapers, on the road and on double decker buses too.
Shraddha and Farhan are handling the main vocals while they get a back-up from Nihaal Shetty, Loy Mendonsa, Ehsaan Noorani, Shankar Mahadevan, Soumil Shringarpure, Siddharth Mahadevan, Arun Kamath and Jaspreet Jasz.
Lyrics, as we all already know, have been penned by Javed Akhtar and the video has been directed by Prakash Varma.
Watch the song here:

Farhan created the buzz about the song this morning with this video:

In fact, we liked this version of Rock On Revisited by Farhan better:

Directed by Shujaat Saudagar, Rock On 2 will hit the screens on November 11.