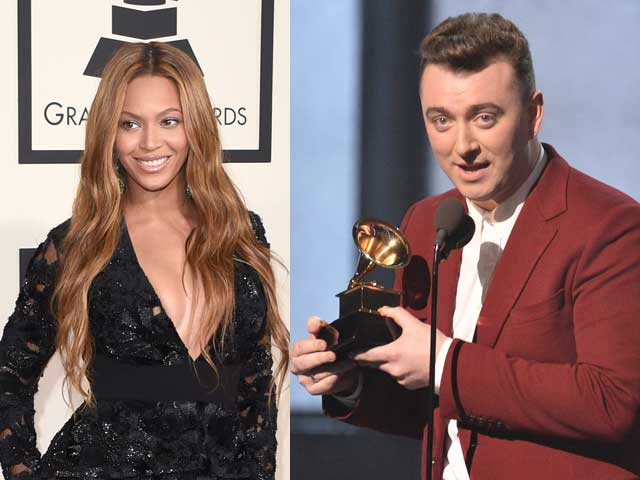 Singer Beyonce scooped three Grammys at music's biggest night, pushing Aretha Franklin to third place on the list of female artistes with the most Grammys.

Beyonce won Best R&B Performance and Best R&B Song for Drunk in Love, and Best Surround Sound Album for On The Run Tour: Beyonce & Jay-Z. Her total Grammy haul is now 20, just ahead of Aretha Franklin's 17 wins and behind Alison Krauss' 27. (Grammys 2015: List of Winners)

The 33-year-old songstress also scored a win in the fashion stakes, in plunging black Proenza Schouler, and performed a stirring version of the gospel song Take My Hand, Precious Lord.

The night, however, belonged to British singer Sam Smith, who performed his hit song Stay With Me with Mary J Blige. Sam won four of the six awards he was nominated for, including three of the night's biggest prizes - Album of the Year, Song of the Year, Record of the Year, Best New Artist, and Best Pop Vocal Album for In the Lonely Hour. "I'm having a really, really, really good night," he said while collecting his fourth award.(In Pics: Beyonce, Madonna, Taylor on Grammys Red Carpet )

Eminem won the Best Rap Album Grammy for The Marshall Mathers LP 2, his sixth so far which is a record.

The Grammys were held at the Staples Centre in Los Angeles on the night of February 8, which was the morning of February 9 for Indian viewers.