Beyonce received nods in nine categories for the music industry's biggest night including Album of the Year for Lemonade, her contemplative look at African-American women that she intertwined with a movie 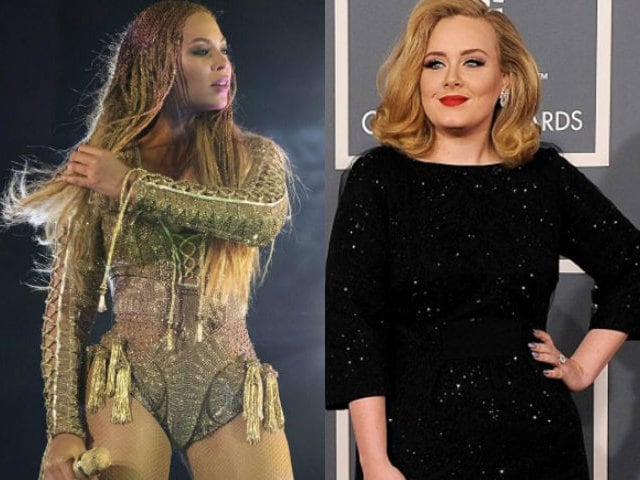 Grammys 2017: Beyonce and Adele will go head-to-head for Record of the Year (Image courtesy: AFP)

Pop diva Beyonce on Tuesday led nominations for next year's Grammy Awards but faced tough competition from fellow chart-topping artists including Adele. Beyonce received nods in nine categories for the music industry's biggest night including Album of the Year for Lemonade, her contemplative look at African-American women that she intertwined with a movie. Beyonce will face off at the February 12 awards in three of the most prestigious categories against English balladeer Adele, whose 25 has been one of the top-selling albums of the 21st century. Besides Album of the Year, Beyonce and Adele go head-to-head for Record of the Year, which recognizes individual tracks, and Song of the Year, which looks at song writing.
Adele was nominated in the two categories for her power-track of lost love Hello while Beyonce is in the running for Formation, a bouncy track that marks her deepest foray into hip-hop.
The 59th Grammy Awards will be presented at a gala in Los Angeles after voting by 13,000 music professionals.
If she wins in all categories, Beyonce would break the record for most Grammys by a female artist.
Beyonce has won 20 Grammys over her career but has never won Album of the Year, despite being nominated twice in the category.
- Rule change for streaming -
Two of hip-hop's biggest names, Kanye West and Drake, were each nominated in eight categories as was R&B sensation Rihanna.
Kanye, a media celebrity who recently was hospitalized after a reported breakdown, took advantage of a change in Grammy rules to consider streaming-only releases.
West put out his last album, The Life of Pablo, only on Tidal and then other streaming services as the on-demand online format rapidly grows.
With no physical album, West challenged traditional industry notions of an album, tinkering with his music after its "release."
Along with Adele's 25 and Beyonce's Lemonade, nominees for Album of the Year included Drake's Views, the top-selling album released in 2016 in the United States and fellow Canadian star Justin Bieber's Purpose.
The biggest surprise for Album of the Year was A Sailor's Guide to Earth by Sturgill Simpson, a country singer who has won a high-brow audience with abstract lyricism including meditations on Tibetan Buddhism.
It marks the second straight year that an alternative-minded country star was nominated for Album of the Year after Chris Stapleton, who ultimately lost to Taylor Swift in February.
- Low-key nods for Bowie -
Lukas Graham, the Danish pop group with songs that explore income and social inequalities, was nominated for both Record of the Year and Song of the Year for 7 Years.
Other relatively new acts to rake in nominations was Chance the Rapper, the introspective Chicago hip-hop artist known for his freestyles and past work with West.
Chance the Rapper was nominated in seven categories, among them Best New Artist even though he has been active for several years.
Other nominees for Best New Artist, considered one of the top four categories, included Anderson .Paak, the experimental California hip-hop artist who blends in jazz and soul.
Also in the running for Best New Artist were electronic sensations The Chainsmokers and the country singers Kelsea Ballerini and Maren Morris.
Rock legend David Bowie, whose death from an undisclosed battle with cancer stunned the music world in January, was passed over for the most visible categories.
But his acclaimed final album Blackstar released two days before his death, was up for Grammys in five categories including Best Alternative Music Album.
Bowie, who always enjoyed more accolades in his native Britain than in his adopted home of the United States, was up in the Alternative Music Album category against other favourites of critics -- Bon Iver, PJ Harvey, Iggy Pop and Radiohead.
Find the complete list of nominations here.