Grammys Red Carpet: Lady Gaga stole the limelight the moment she made a bold appearance in all black. Jennifer Lopez was ethereal in lilac while Katy Perry experimented with her Grammy outfit 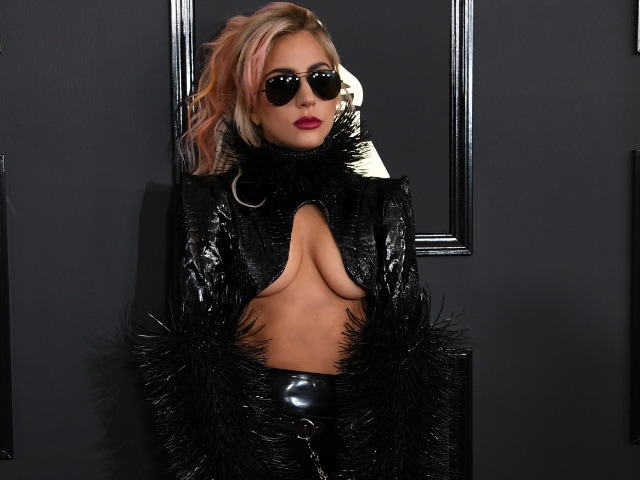 The music world's hottest stars were dressed in their best as they walked the Grammys red carpet at the Staples Canter in Los Angeles on Sunday. The 59th Annual Grammy Awards saw music world's biggest celebrities arriving - Lady Gaga stole the limelight the moment she made a bold appearance in all black. Jennifer Lopez was ethereal in lilac while Katy Perry experimented with her Grammy outfit. 25 singer Adele kept it simple in a green, floor-length ensemble and Rihanna stunned in orange and black separates. We have carefully curated the top moments from the A-list fashion parade at the 59th Grammy Awards.
- A Lady Gaga Surprise -
There is never a dearth of surprise as long as Lady Gaga is concerned. The You And I singer sent the paparazzi in a tizzy as she walked the red carpet in typically-Gaga persona. From her cropped leather jacket to pants and sunglasses - she opted for everything in black. Can you handle this swag overdose from Lady Gaga? 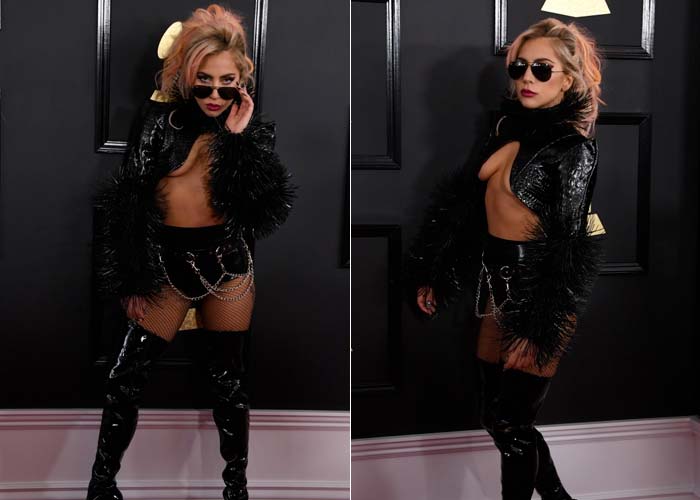 - Metallic Hues From Rihanna And Paris Jackson -
Perhaps, orange is the new black for Rihanna, who paired her flaring gown-like skirt with a shimmering orange blouse. She looked wow. Paris Jackson - yes, the daughter of the King of Pop Michael Jackson is now 18. She earned plaudits for her youthful sleeveless multi-coloured Balmain dress. Her blonde hair was cropped and shaggy. 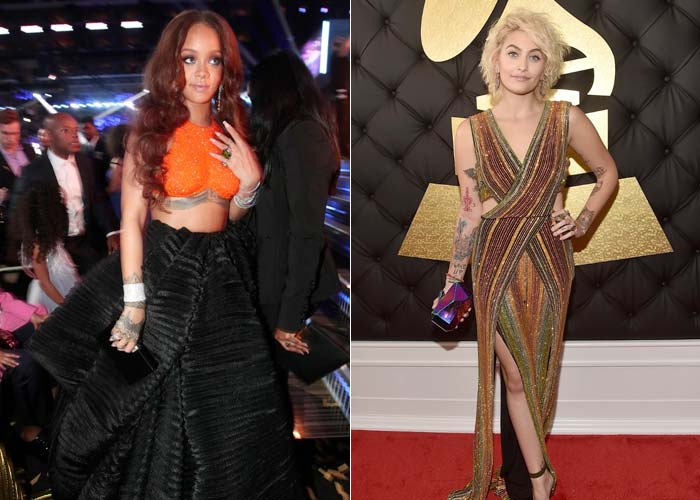 - Hello from the red carpet -
Adele turned to Givenchy for her Grammys look - a custom pleated live green floor-length gown with a chaste neckline, a criss-cross bodice and a fitted waist. Her hair was swept up, and her signature cat-eye makeup was in place.
The British balladeer, who opened the show with her global megahit Hello. She received the Song Of The Year Grammy for Hello, and also won in the other two categories - Best Pop Vocal Album and Best Pop Solo Performance - which were handed out before the main telecast. 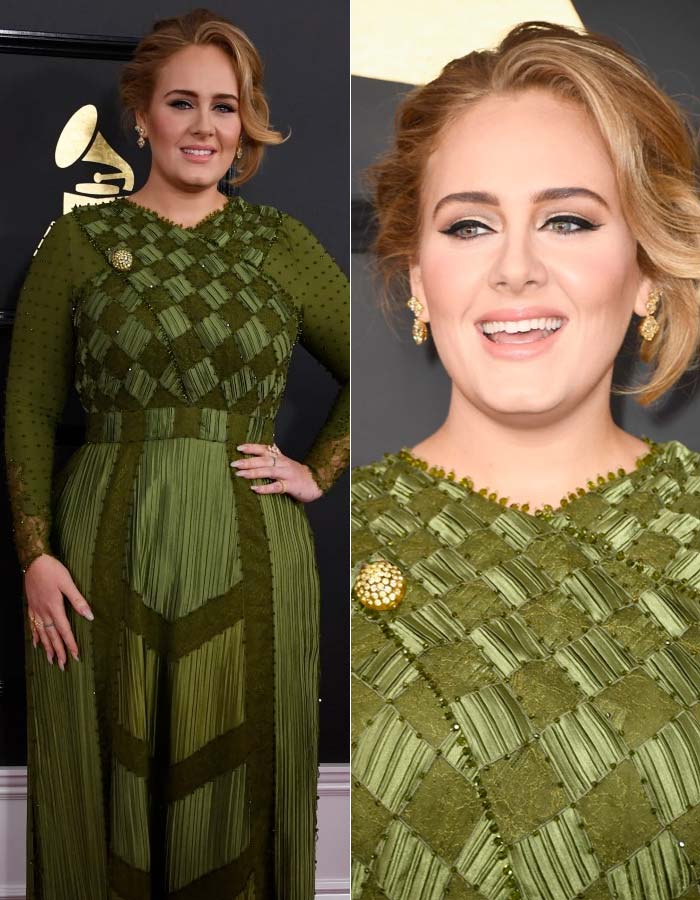 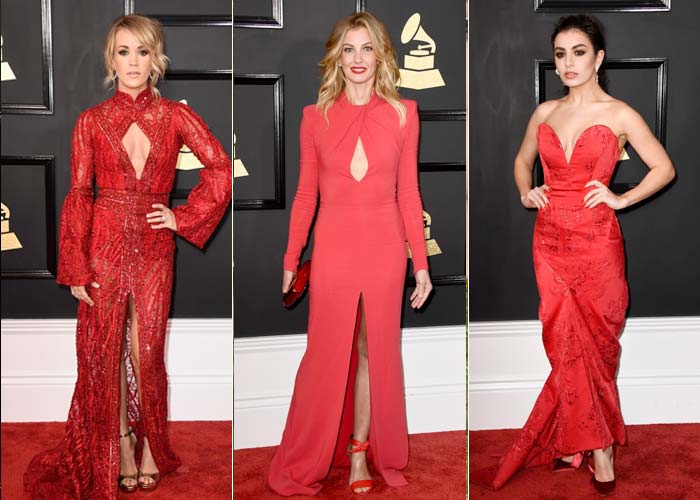 - And they wear pants too -
After actress Evan Rachel Wood's much-adored tux at the Golden Globes, and her pledge to ditch the dresses for all of awards season, the ladies of the music world embraced jumpsuits and pantsuits on Grammys night.
Country music singer-songwriter Brandy Clark rocked an all-black pantsuit with flared trousers. And R&B singer Mya looked sultry in a red pantsuit with a blouse that was anything but innocent. 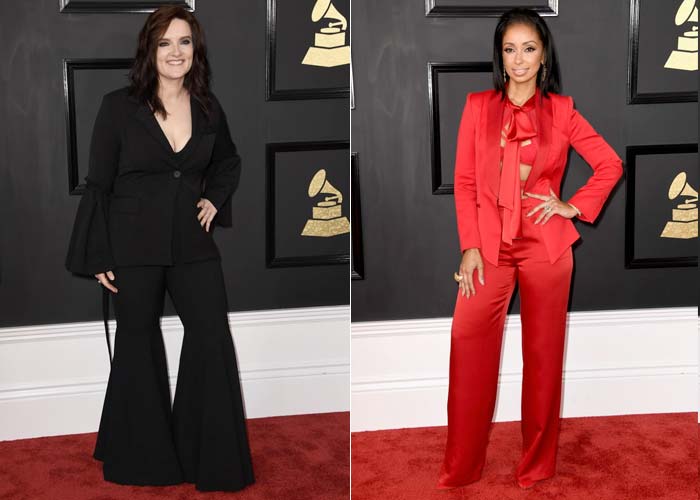 - A few misses -
Jennifer Lopez may have rocked the Grammys red carpet in 2000 with her plunging barely-there green Versace gown, but on Sunday, she missed the mark in a frothy lilac Ralph & Russo halter gown. Katy Perry turned to celeb designer Tom Ford, but the pale pink floor-length feather skirt topped with a somewhat ill-fitting metallic long-sleeve top didn't really work. Her message about "purposeful pop" - far better. "That's what we need more than ever... to listen to one another," the newly blonde Perry told E! Network on the red carpet. 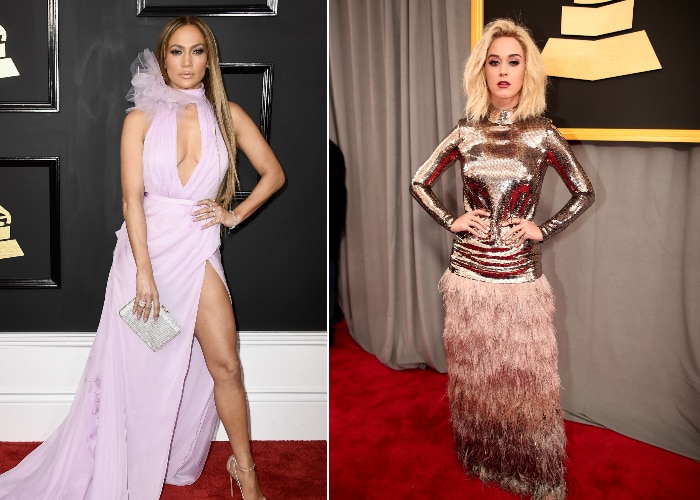 And Cee-Lo Green looked like a cross between Star Wars droid C-3PO and a gilded samurai warrior.
- Make America Great Again (?) -
A pro-Trump statement at the Grammys? It seemed unlikely, and yet, there it was.
Singer Joy Villa arrived in a white cape which she took off to reveal a tight red, white and blue gown with "Make America Great Again" emblazoned on the front and a glittering silver "TRUMP" across the bottom of the train. On her Instagram, Villa, known more for her red carpet statements than her singing, said: "My whole artistic platform is about love!" The ensemble earned immediate scorn on Twitter and Instagram. But Villa, who is not a Grammy nominee, is no stranger to red carpet controversy. 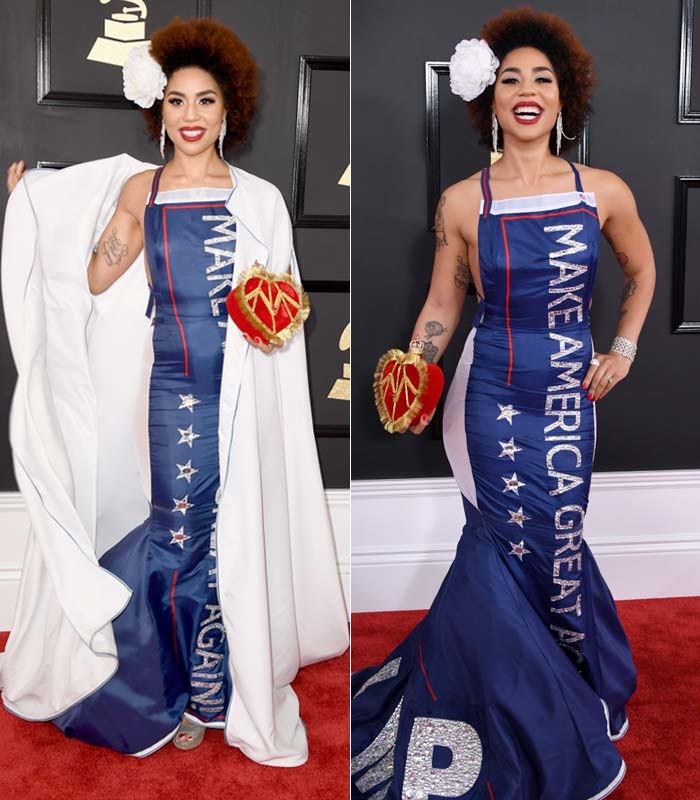 Last year, she wore something that barely qualified as a dress - strips of metallic material that looked like dinosaur bones and left little to the imagination.
The year before? It was a revealing orange plastic lattice dress.