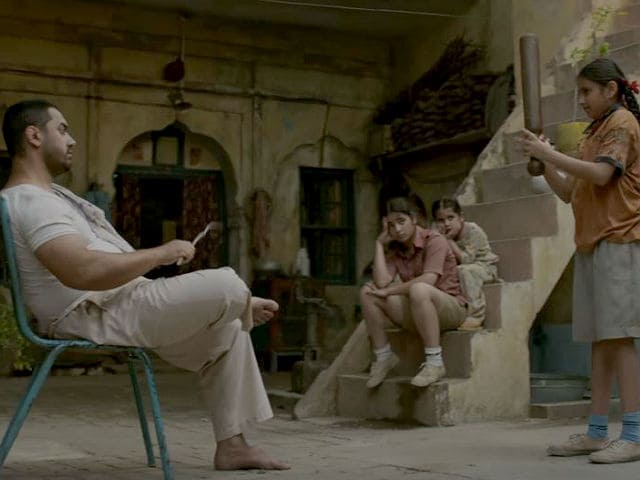 A still from Dangal

The first song from Aamir Khan's upcoming sports drama film Dangal is out. It's titled Haanikaarak Bapu. The lyrics (written by Amitabh Bhattacharya) of the song are funnier than the title.
The song starts with Aamir (who plays wrestler Mahavir Phogat) issuing a diktat for his daughter Geeta and Babita Phogat - aaj se tum dono pehelwaan ki zindagi jiyoge. In the next two-and-half minutes we see how strictly Phogat coaches his daughters for wrestling and how Geeta and Babita have to kill their desires like gol gappe and achaar.

The song is composed by Pritam and sung by Sarwar Khan and Sartaz Khan Barna with additional vocals by Kheta Khan and Dayam Khan.
Dangal chronicles the journey of Phogat and his daughters through the world of wrestling and how they overcome prejudice, societal pressure and conventional beliefs about traditional notions of gender.
Aamir plays both the younger and older characters of Mahavir Phogat in the film. He had put on weight up to 95 kg to play the older part and brought it down to around 70 kg for the younger version. In the song we see the older version of the wrestler.
Directed by Nitesh Tiwari, Dangal also stars Sakshi Tanwar and will release on December 23. Fatima Sana Shaikh and Sanya Malhotra play the older version of Geeta and Babita Phogat.
The film is produced by Aamir Khan, Kiran Rao and Siddharth Roy Kapur.