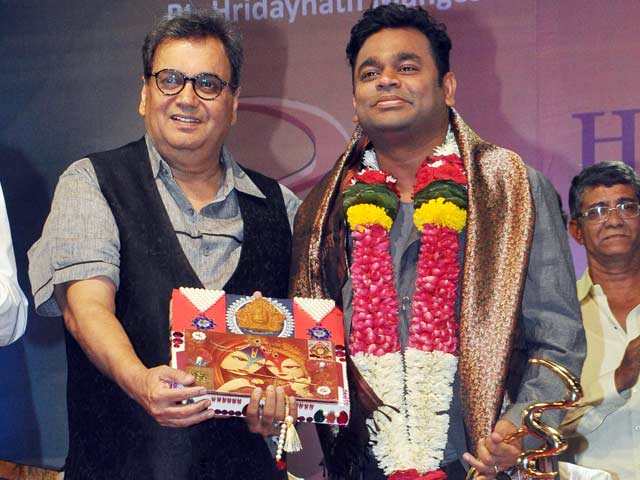 "It was a great honour to honour A R Rahman with Hridaynath Mangeshkar Award last night with the background music of Taal with thundering applause from the audience," Subhash Ghai wrote on Twitter


It was great honour to honour A R RAHMAN with lata mangeshkar award last night with the background music of TAAL pic.twitter.com/0i5MWUbKb9

Arr knows how to win hearts- last night i felt honoured to honour rahman with lara Mangeshkar award- he won every 1 pic.twitter.com/zCvoBehaAB

He thanked the composer for 'your generous words at the award function for me'.


Thank u Rahman at lata Mangeshkar award function for your generous words for me while receiving lata... https://t.co/MbYSLJK2U0

The filmmaker also shared a 12-second video online of Mr Rahman in which he is seen saying how people quickly associate him with the 1999 hit film Taal.


Thank u rahman for your generous words at lata Mangeshkar Hridayanath award function for me " where ever rahman goes in the world First they say taal music,,,, I feel humbled