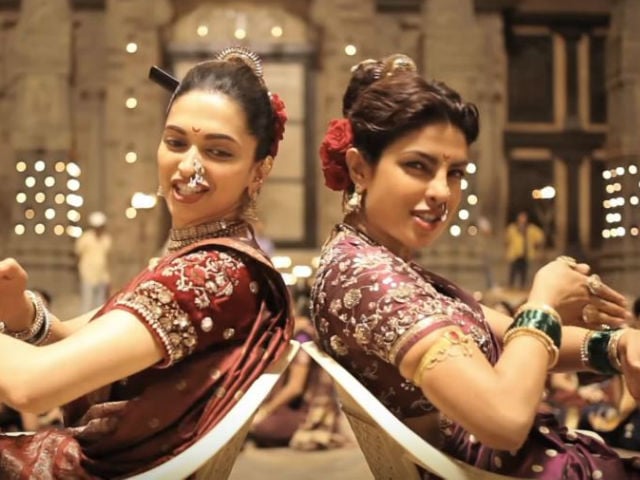 A still from the making of Pinga.

Pinga features a friendly dance-off between Deepika and Priyanka, much like how it was in Dola Re from Sanjay Leela Bhansali's Devdas, which featured Madhuri Dixit and Aishwarya Rai. Enough has been said about the song, now take a look at what happened during the shooting of the Pinga

Priyanka Chopra and Deepika Padukone's song Pinga from upcoming film Bajirao Mastani has been the talk of the town ever since it was released. The song features a friendly dance-off between the two actresses, much like how it was in Dola Re from Sanjay Leela Bhansali's Devdas, which featured Madhuri Dixit and Aishwarya Rai Bachchan.
Enough has been said about the song, which has more than 8 lakh views on YouTube, here's a look at what happened during the shooting of the Pinga.
After a (mock) catfight between Deepika and Priyanka, the actresses said that they had each other's back while shooting for Pinga. "Knowing that she's here for me and I'm there for her made the entire process of shooting the song much, much easier," said Deepika, while Priyanka added, "Much to Sanjay sir's disappointment." (Also Read: Have You Seen Deepika Padukone, Priyanka Chopra's Pinga Dance-Off Yet?)
Deepika said that shooting for a song like Pinga is a 'challenge in itself'. "You're shooting for the same song for over 9 days and you have to keep the act as exciting as it was on the tenth day as it was on the first day." "And on the 25th day," supplied Priyanka. "True that," Deepika said with a mock-serious expression.
Deepika said that the song was Mr Bhansali's 'dream' and here's how Priyanka and Deepika made his 'dream come true':