Chris Martin Was in the House? Delhi Club Owner Wants to 'Kill' Himself 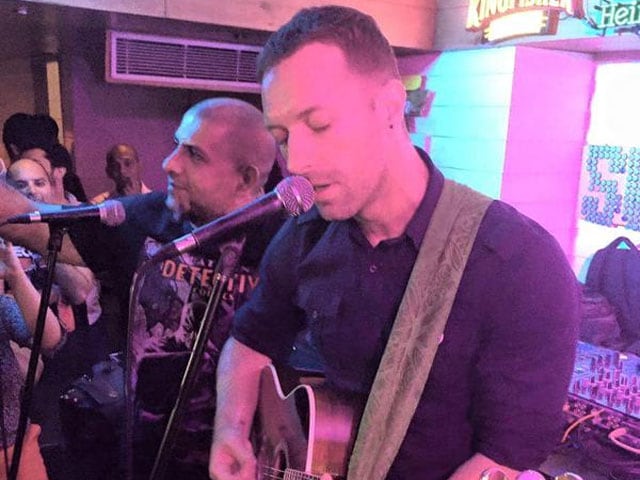 "As a fan, I feel like killing myself. As a founder of Summer House - it's been graced by God himself and it's holy and divine now - I feel like telling people to take their shoes off before they come in, says Anchit Kapil, the owner of the club where Chris Martin performed and who missed the concert

"When God decides to do something, it just happens." That's how Anchit Kapil, director of Delhi hotspot Summer House Cafe, describes how Coldplay frontman Chris Martin happened to show up and play an impromptu set late Wednesday night.
Sometime after 11pm on Wednesday, Chris Martin walked into Summer House Cafe with actress Freida Pinto, musicians Vishal Dadlani and Raghu Dixit and the guys from comedy collective AIB. They stayed an hour, didn't eat anything, had a few beers, Chris Martin had a martini (which is going on the menu, Mr Kapil says. We suggested it be called the Chris Martini, haha), and then took the stage and sang five-odd songs. The set included Paradise, Viva La Vida and Fix You.
Those of Delhi's music-living nightclubbing public who did not happen to have chosen the night before to party at Summer House have been cursing their luck all of Thursday. Surely nobody could be more bereft than Anchit Kapil himself, who missed the spur-of-the-moment concert by an hour or so - by 11.15pm, he was home in Gurgaon.
How does that make him feel? "As a fan, I feel like killing myself. As a founder of Summer House - it's been graced by God himself and it's holy and divine now - I feel like telling people to take their shoes off before they come in. Yeh pure jagah hai," he says.
However, he was there "mentally," organizing things on the phone, after Only Much Louder founder Vijay Nair called him to ask if Summer House could arrange sound and security for Chris Martin, arriving in 10 minutes.
In 10 minutes, they rustled up bouncers and the sound.
Until Mr Martin actually showed up, there was a sense of disbelief. "Even we didn't believe it ourselves, we were in a state of denial. But it happened?" Anchit Kapil says. When he did walk in, "it was a moment of shock and surprise and everyone was stunned and were going crazy shooting videos." Spare a thought, at this moment, for his partner who was at the gig but in such a state of shock that he didn't think to take a picture with Mr Martin. Or any pictures at all.
If you're wondering why the word wasn't put out the very moment Summer House knew Chris Martin was going to show up, it was because there was simply no time. "It takes 2-3 hours to set up the sound, we had 10 minutes. We simply had no time to tell anyone what was going on," Anchit Kapil says. Not that his friends believe him: "My friends hate me. They think I didn't tell them on purpose. I didn't know who I'm going to chill with on Friday nights now."
Why Summer House? "It's a place where anything can happen, at any time," says Mr Kapil. AIB have been spotted there, as have been most of the OML crew. So Mr Martin told his posse over dinner at their hotel that he wanted to go out and play somewhere and they made it happen. But as Mr Kapil puts it, "If Chris Martin had wanted to play on top of the Qutab Minar, they would have made it happen."
Anchit Kapil has these words of comfort to offer to those of us who were snoozing at home or had picked the wrong place to party: "Don't take your weekdays lightly."
Watch the entire gig here: