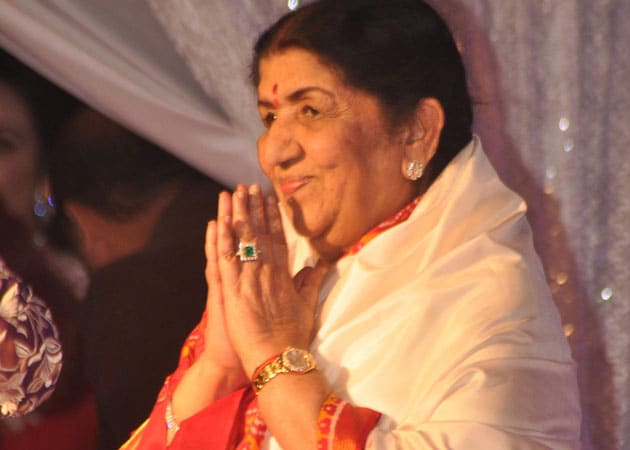 "I declined, because there was no time to rehearse," says Lata Mangeshkar

Reminiscing about the song that continues to resound at patriotic celebrations in the country, veteran singer Lata Mangeshkar says she had initially refused to be a part of it.

Reminiscing about the song that continues to resound at patriotic celebrations in the country, veteran singer Lata Mangeshkar, who sang it live 50 years ago to an audience comprising leaders of India's freedom struggle, says she had initially refused to be a part of it.
"Who thought this song would turn out so famous," asked Lata Mangeshkar, talking about the song that became a regular hit at gatherings to celebrate patriotism in India.
"I recall vividly that cold winter evening in Delhi in 1963 when I sang the song as part of Republic Day celebrations in front of an audience comprising President S Radhakrishnan, Prime Minister Jawaharlal Nehru, Indira Gandhi and so many other distinguished guests.
"It was Pradeepji, (also known as Kavi Pradeep) the poet, who wrote the immortal lyrics, who came to me and asked me to sing the song. I declined, because there was no time to rehearse. You see, at that time I was working round-the-clock. To give special attention to one song seemed impossible. But Pradeepji insisted," she added.
The song was written shortly after the 1962 India-China war and served to unite the masses. Ms Mangeshkar revealed that she wanted to sing it with sister Asha Bhosle, but that didn't happen.
"I suggested we format the song into a duet with me and my sister Asha (Bhosle). But Pradeepji wanted it to be a solo. Asha too opted out. I tried to convince her to change her mind arguing that her name had even been printed in the newspapers as one of the singers," said the 83-year-old.
"Composer-singer Hemant Kumar had actually orchestrated the whole Ae Mere Watan Ke Logon project. I told Hemantda about Asha's decision. Hemantda also tried to convince Asha. But she would not agree. Then it was left to me to rehearse alone for the song," she added.
The legendary singer reveals that she couldn't even rehearse for the song properly before performing it in front of the distinguished gathering.
"Pradeepji told C Ramachandra, who was composing the tune for the song, about my predicament. C Ramachandra informed us he had to be in Delhi at least four days ahead of the performance. So he was unable to rehearse the song with me. Instead he gave me a tape of the number. I picked up the tune from the tape and flew to Delhi on January 26, 1963," she said.
"I was listening to the tape with C Ramachandraji's rendition of Ae Mere Watan Ke Logon all through the flight from Mumbai to Delhi, accompanied by my best friend Nalini Mhatre," she added.
Ms Mangeshkar recalls how nervous she was before the performance.
"When we reached Delhi in the night, I had a stomach ache. I asked Nalini how I'd sing in my condition. She told me not to worry, everything would be fine. On January 27, we reached the venue. I sang two songs. The bhajan (devotional song) Allah Tero Naam followed by Ae Mere Watan Ke Logon," she said.
"I was much relieved to get it over with. After I finished my two songs, I went backstage to relax with a cup of coffee. I heard Mehboob Khan sahab calling for me. He caught hold of my hand and said, 'Chalo, Panditji (Jawaharlal Nehru) ne bulaya hai'. (Panditji has called us.)
"Panditji said he liked the song very much, and my eyes welled with tears. While the rest of the entourage spoke eagerly with Panditji, I stood in a dark corner hesitant to make my presence felt. I heard Panditji ask where I was.
"Then Mrs Indira Gandhi came and took my hands saying: 'I want you to meet two of your little fans.' She introduced me to little Rajiv and Sanjay Gandhi. They did 'Namaste' and ran away. Then Panditji again asked for me. Mehboob Khan sahab came and took me near Panditji. Panditji asked, 'Are you going to go back to Mumbai and sing Ae Mere Watan Ke Logon? I replied, 'No, it was meant to be a one-off thing'. He wanted a picture with me. We posed for a keepsake and then I quietly left."
Lata Mangeshkar never thought the song would become so popular.
"Since it was not part of a film, I thought it would have a limited impact. Ae Mere Watan Ke Logon became my signature tune. No show of mine, no concert or event is complete until I sing it," she said.
"My regret is that Pradeepji had not been called for the Republic Day function where I sang the song. If he was there, he would have seen with his own eyes what impact Ae Mere Watan Ke Logon had," she added.