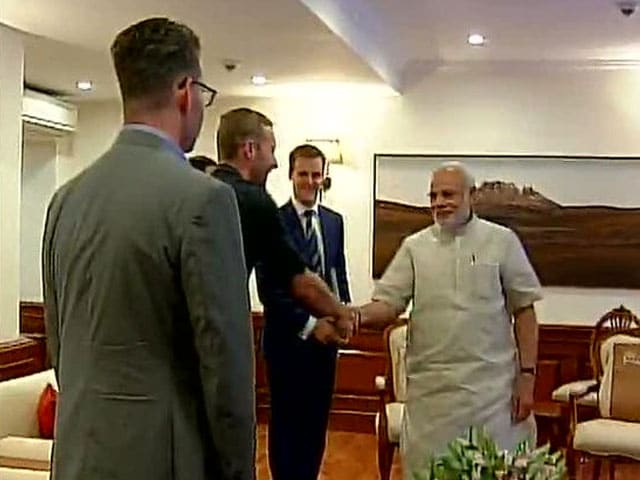 He wasn't just here to play a gig nobody knew about, Chris Martin meant serious business on his visit to India. The Coldplay frontman and actress Freida Pinto met Prime Minister Narendra Modi on July 2 in New Delhi as part of a delegation from the Global Poverty Project.
The Press Information Bureau or PIB tweeted a picture of the meeting:

According to a government press release, the delegation also included Global Poverty Project CEO Hugh Evans and Vijay Nair, founder of the venet management company OML. Some of PM Modi's pet projects were discussed - the Swachh Bharat campaign, Namaami Gange and Beti Bachao-Beti Padhao initiatives - and his guests 'reaffirmed their support to these causes.'
Chris Martin also called on Delhi Chief Minister Arvind Kejriwal at his official residence. The meeting lasted for about 25 minutes, a government official told news agency IANS.
No reason for the meeting was given beyond this: "The Chief Minister has been in the news not just in India but around the world."
The Global Poverty Project works in the development sector and aims to eradicate poverty by 2030. Chris and Freida are here on a goodwill visit. Chris Martin is also a part of GPP's online platform, Global Citizen, and helps them promote campaigns for social development. Global Citizen's previous events have featured Jay-Z, Fun, Stevie Wonder, The Foo Fighters and Alicia Keys.
However, all this emerged only in the second half of Thursday. Early morning, Delhiwalas woke up to the news that Chris Martin had played an impromptu set at a popular night spot and that most of them had missed it. His 10 minute set list included Coldplay hits Paradise, Viva La Vida and Fix It. He was accompanied by Freida, musicians Vishal Dadlani and Raghu Dixit who jammed with him, and the gentlemen from comedy collective AIB who introduced him.
Watch his set here: