"When I first heard her voice, it was like Bollywood mainstream voice," Himmesh Reshammiya said 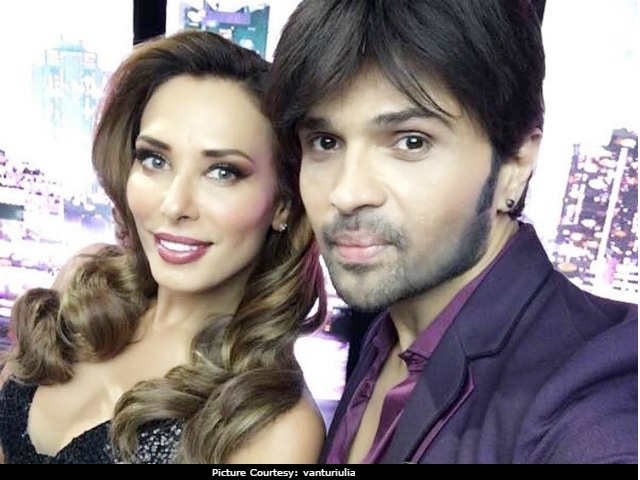 Romanian TV personality Iulia Vantur is making her singing debut and has received a vote of confidence from composer Himesh Reshammiya. Iulia, rumoured to be dating Salman Khan, has a "Bollywood mainstream voice," Mr Reshammiya told news agency IANS. Iulia, 36, provids thee vocals for sa ong titled Every Night And Day on Himesh Reshammiya's new album Aap Se Mausiiquii. "When I first heard her voice, it was like Bollywood mainstream voice. Initially, I didn't know whether she could sing in Hindi, but when I sent her the song, she completed the dubbing in one hour," Mr Reshammiya said at the shoot for Every Night And Day, reports IANS.
He had more praise for her. "Usually, best singers take four to five hours for it. She has sung the song without auto tuning. She has an angelic voice and I would like to collaborate with her in new songs as well," Himesh Reshammiya told IANS.
There was more. "The appreciation that we received after the release of the audio of Every Night And Day is all because of Iulia Vantur. According to me as a composer of this song, she made this song sound very fresh. We are shooting our sixth video of my album, and we will release this song at the end of this month," Mr Reshammiya said, reports IANS.
Of Salman Khan, whose protege; he is, Himesh Reshammiya said, "Salman understands music. He is a big star and my mentor in this field. I don't question him at all. We make our bank of tunes and if Salman bhai feels that a particular tune will be best for his film, then he is the one who decides it. Right now, we have created some amazing compositions and now it is in Salman's hand when to utilise those tunes." Mr Reshammiya has contributed to the soundtracks for the Salman filmsKick, Prem Ratan Dhan Payo, Bodyguard and others.
Iulia Vantur is fresh from her Maldives vacation with the Khans and is now prepping to officially debut as a singer.
(With inputs from IANS)