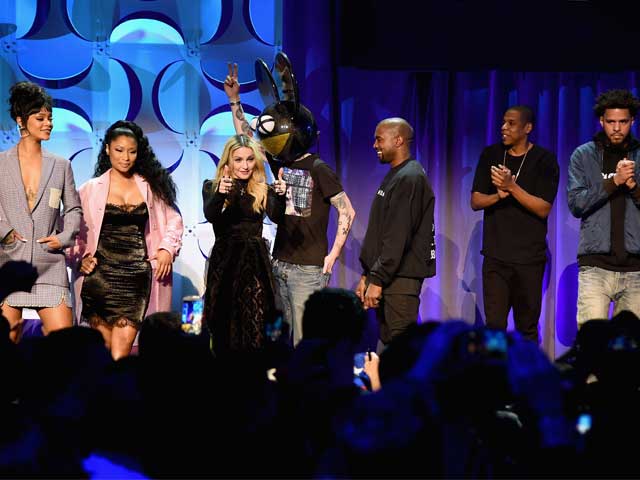 "They are the carrier; we are the artists. Somehow things shifted and we went into the background, and it has to come forward," Madonna said at the event

With veiled swipes at streaming leader Spotify, Jay-Z brought out musicians including Madonna, Kanye West and the masked electronic duo Daft Punk, who will all be equity partners in the new Tidal.

Earlier this year, Jay-Z bought Tidal, which markets itself to audiophiles, by spending $56 million for its Swedish-listed parent company Aspiro.

At the announcement in New York, singer Alicia Keys hinted that some musicians could choose to release material exclusively or early on the artist-owned service.

"Tidal is dedicated to cultivating a sound business enterprise that promotes the health and sustainability of our art and our industry around the world," Alicia Keys said.

"We believe it is in everyone's interest - fans, artists and the industry as a whole - to preserve the value of music and to ensure a healthy and robust industry for years to come."

Tidal released a promotional video in which musicians accused unnamed streaming companies of treating them as mere commercial products.

"They are the carrier; we are the artists. Somehow things shifted and we went into the background, and it has to come forward," Madonna said.

Tidal said it was also working on the relaunch with Sprint, one of the major cellular providers in USA, which is owned by Japan's Softbank.

The artists signed a declaration to the sounds of Radiohead, the British experimental rockers who along with Taylor Swift have accused Spotify of devaluing music through meager payouts to artists.

Spotify has rejected the accusations, saying that it is a rare source of growth in music sales and has paid out $2 billion toward artists since 2007.

Streaming - which allows users to play unlimited on-demand music online - has quickly shaken up the industry, narrowly edging out CD sales in revenues last year in the United States of America.

Spotify, also from Sweden, says it has 60 million users with 15 million of them paying - usually $9.99 a month.

Unlike Spotify, Tidal does not offer a free service and is generally twice as expensive, at $19.99 a month, although for the relaunch, it also offered a more basic $9.99 service.

Tidal streams at 1,411 kilobytes per second - well above the 320 for premium subscribers of Spotify, which offers even lower levels for free users.

Tidal will also try to distinguish itself through ample videos.

But he gave an interview to industry journal Billboard in which he billed Tidal as a new way for artists to experiment with form.

He acknowledged that some music labels were nervous about the project but described it more as a "record store" than a new record company.

Spotify already has a range of rivals including US-based Rhapsody and Google Play.

Paris-based Deezer, which is strong in Europe, last year entered the United States as a high-end-only service which, like Tidal, uses FLAC rather than more common MP3 files.

Apple - which pioneered digital music through iTunes in 2001 -- has sought to expand in streaming as the market shifts away from permanent downloads.

Tidal entered the United States late last year and operates in 31 countries, with six more to come this year including Australia and Germany. Before Jay-Z's purchase, Aspiro said it had 512,000 paying users for Tidal and sister service WiMP.