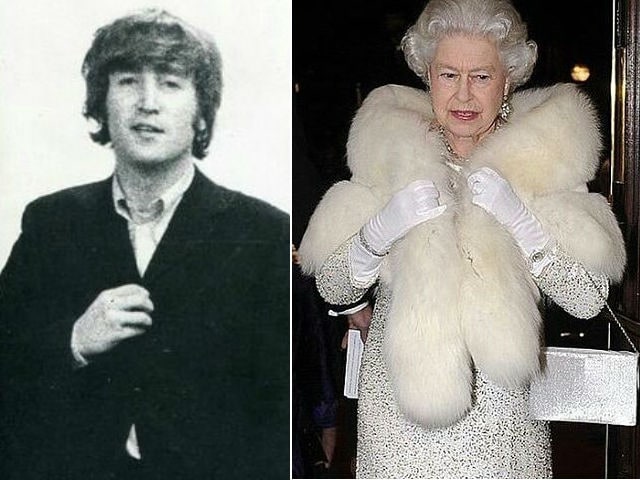 These images were posted on Instagram by beatles_germany and xanm3

A letter written to Queen Elizabeth II by John Lennon when he returned his MBE (Most Excellent Order of the British Empire) to Buckingham Palace has been valued at 60,000 British pounds ($73,041.64), it was revealed in Liverpool on Thursday.
The hand-written letter was brought forward on Wednesday at a special Beatles memorabilia day held at The Beatles Story exhibition in Liverpool when auctioneers Julien's Auctions were putting value on The Beatles' items, Xinhua news agency reported.
It had been found among a collection of records bought for just 10 pounds at a car trunk sale 20 years ago.
Written by John to Queen Elizabeth II, the letter explained why he had returned his MBE, awarded to each member of the band in the Queen's honours.
According to a spokeswoman for The Beatles Story, the owner of the letter, who wished to remain anonymous, brought the letter at The Beatles Story on Wednesday, where members of the public were being offered free valuations.
"The letter was discovered tucked away inside the sleeve of a record that was part of a collection of 45s (45 rpm records). The letter, which was recently unearthed in the owner's attic, has been described as an 'incredible find' by music memorabilia expert Darren Julien of Los Angeles-based Julien's Auctions."
Until the meeting with Julien on Wednesday night, the owner of the letter had presumed it must have been a copy and was stunned to discover it could be worth such a huge sum of money, added the spokeswoman.
Julien, director at Julien's Auctions, said he was thrilled to have uncovered such a hidden gem during his brief visit to Liverpool.
"Being the birthplace of The Beatles, I was quite confident that we would uncover something special during the memorabilia day at The Beatles Story," Xinhua news agency quoted Julien as saying.
He said there was no doubt it was John's hand writing and said it could be "The Beatles find of the year".
Julien's theory on how the letter ended up in the hands of a member of the public is that John never actually sent this version to the Queen when he famously returned his MBE.
"You can quite clearly see that the signature in this letter has been smudged. My theory is that John Lennon never sent this draft because of the smeared ink. If you're writing to the Queen, you want the letter to look pretty perfect, you don't want the ink to be smudged. This suggests that he wrote a second version of the letter, which was the one that was actually sent to the Queen," he said.
John Lennon was an English singer and songwriter who co-founded the Beatles.
(Except for the headline, this story has not been edited by NDTV staff and is published from a syndicated feed.)