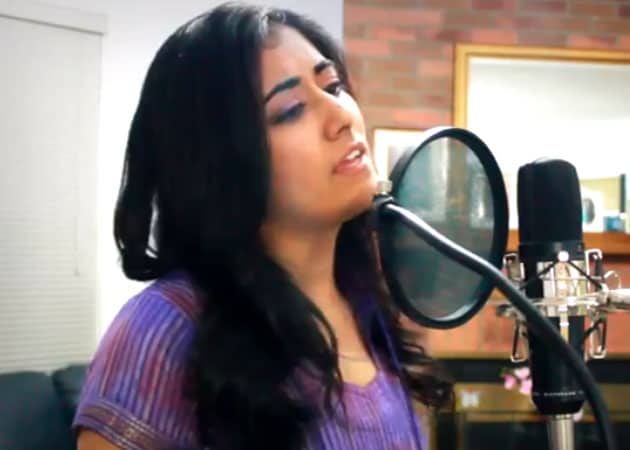 Jonita has sung the title track of Chennai Express

Jonita Gandhi, who had the privilege of singing for superstar Shah Rukh Khan-starrer Chennai Express along with singing legend SP Balasubramanyam (SPB), considers herself "lucky" and describes the experience as "unbelievable" and "special".

Indo-Canadian vocalist Jonita Gandhi, who had the privilege of singing for superstar Shah Rukh Khan-starrer Chennai Express along with singing legend SP Balasubramanyam (SPB), considers herself "lucky" and describes the experience as "unbelievable" and "special".
Jonita crooned the opening track called Chennai Express in the film with SPB.
"I still can't believe that my first song in Bollywood is for Shah Rukh Khan, and to sing that song alongside SPB sir makes the experience even more special. I think I was at the right place at the right time," Jonita said.
Even though she couldn't record with SPB, she still finds herself lucky to share the track with him.
"I couldn't meet SPB sir because we had recorded the track separately, but I feel lucky to be on the track with him. How many even get such an opportunity!" she said.
Raised in Canada with Indian roots, Jonita doesn't consider herself alien to Bollywood music.
"My father is a musician and I started singing in his band since very young age. I used to sing with him at several community events. Even though I was raised in Canada, Bollywood has always been dear to me because I used to sing mostly Hindi songs at shows," said Jonita, who shifted base to India while chasing her dream to be a singer.
"My passion to be a singer eventually led me to pack my bags and come to India. Even though I have a degree in business administration, deep down I wanted to be a singer," she added.
Jonita has already crooned a number each in Bengali and Malayalam, but her number from Chennai Express will mark her debut as it is releasing first.
Popular for her cover versions of songs such as Tum Hi Ho and Pani Da, Jonita has no strategy to survive in the industry.
"I don't have any particular strategy because I want to learn as I move forward in the industry. I also want to put to use everything I have learned over the years. I'm trained in Western classical and now I'm learning Hindustani, so that I can be open to singing all types of songs but not just one kind," she added.
Is merging Indian music with western style healthy?
"I think with so many languages in India, it helps in taking music beyond one particular language. Sometimes, it also depends on the story of a film and its characters. I wouldn't say it's healthy, but neither do I say it's bad," she said.