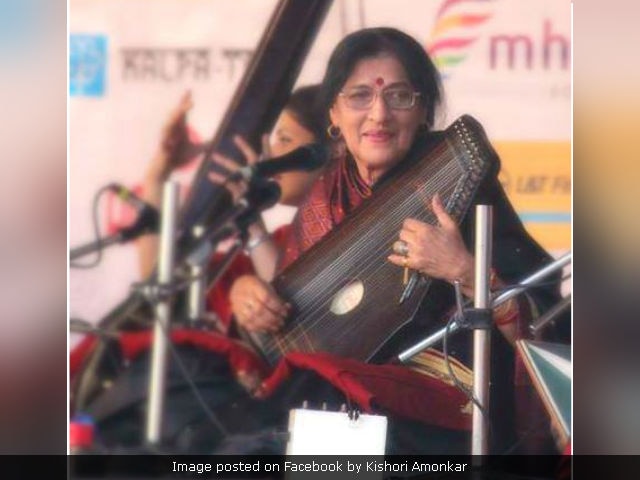 Classical vocalist Kishori Amonkar died after a brief illness at her Mumbai residence on April 3, a family source told news agency PTI. She died a few days before her 85th birthday. Kishori Amonkar was born to renowned vocalist Mogubai Kurdikar and Madhavdas Bhatiya on April 10, 1932. She trained under Alladiya Khan Saheb of the Jaipur gharana. When Kishori Amonkar was under her mother Mogubai Kurdikar's training, she experimented with her style which resonated with other gharanas. Her distinctive style became her signature. The revision of her style and blending of Jaipur gharana with others was often criticised. But overall, her "performances were marked by vitality and grace," reports PTI.
Kishori Amonkar was a well-read woman and her knowledge of music and arts came from the ancient texts on music, reports PTI. She excelled in classical khayal songs set in the ragas of Hindustani music. She also performed classical thumri and bhajan. Her personal style of singing emphasised on expressing emotions and to add an emotional impact she often deviated from the style of Jaipur gharana. Kishori Amonkar was a playback singer in a few songs of 1964 film Geet Gaya Patharon Ne but reportedly shifted back to classical music.
Kishori Amonkar received India's civilian honours, the Padma Bhushan in 1987 and Padma Vibhushan in 2002. She was a fellow of the Sangeet Natak Akademi since 2010. Maharashtra chief minister Devendra Fadnavis shared his condolence message on Twitter describing her as the "doyen of classical music."
Kishori Amonkar was married to Ravindra Amonkar, who died in 1992 and they have two sons.
(With PTI inputs)