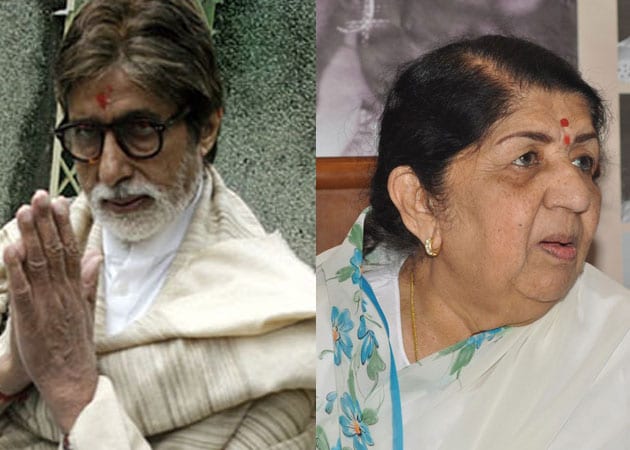 Shamshad Begum died at her Mumbai residence. She was 94.

Condoling the death of legendary playback singer Shamshad Begum, megastar Amitabh Bachchan said the industry had lost its "golden voice", while Lata Mangeshkar remembered her as a "nice and happy soul".

Condoling the death of legendary playback singer Shamshad Begum, megastar Amitabh Bachchan said the industry had lost its "golden voice", while Lata Mangeshkar remembered her as a "nice and happy soul".
Shamshad Begum, who had been ailing for the past few months, died Tuesday. She was 94.
"The golden voice of Shamshad Begum, playback singer of great eminence in some of the most historic film songs... now silent... RIP," Big B tweeted. Six things you didn't know about Shamshad Begum
Amongst the first woman playback singers in the Hindi film industry, Shamshad Begum was born April 14, 1919 in Amritsar, Punjab. Interested in singing from a young age, she got her first break with Peshawar Radio, Lahore, in December 1947.
Some of her famous songs include Kajra mohabbat wala, Leke pehla pehla pyar, Kahinpe nigahen, kahinpe nishaana, Chhod babul ka ghar, Saiyan dilme Aana re and Teri mehfil me kismat ajmaa kar hum bhi dekhenge..
Lata Mangeshkar tweeted: "This morning I came to know that Shamshad Begumji is no more and I was very sad after hearing the news of her demise. I had worked with her in several films. She was a very nice, cheerful and simple human being. I pay my tribute to her."
Lata sang duets like Darna mohabbat karle (Andaz), Kisi ke dil men (Babul) and Panghat pe na jaiyo (Rajmukat) with Shamshad Begum.
Filmmaker Madhur Bhandarkar tweeted: "Shamshad Begum can truly be called the Indian Nightingale. She will be immortal because of her songs. RIP."
Singer Shweta Pandit: "RIP Shamshad Begum - The music Jewel of India is no more. Can't believe am born at a time when some of the greatest artists are leaving us." Shamshad Begum: A song in her heart
Actor-producer Viveck Vaswani: "RIP Shamshad Begum! You were a star to me, my mother and my grandmother!"