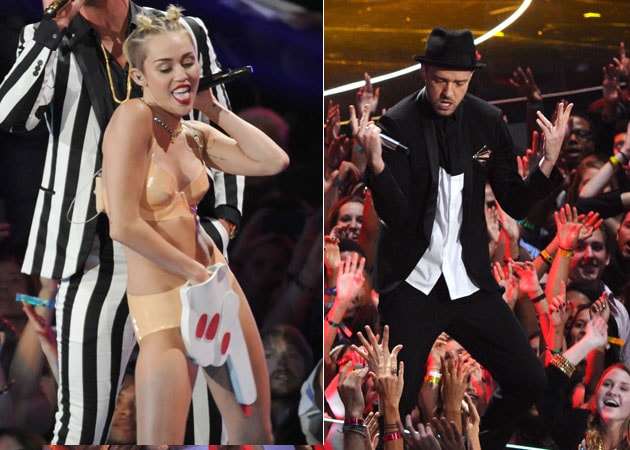 Miley Cyrus' foam finger, Lady Gaga's thong, Taylor Swift's mean streak and the look on Rihanna's face while Drake performed will surely be remembered, but these MTV Video Music Awards belonged to Justin Timberlake.
Timberlake briefly reunited with 'N Sync, won moonman trophies including top honor video of the year for "Mirrors" plus the Michael Jackson Video Vanguard Award and managed to overshadow most of today's top pop stars while doing it.
"I don't deserve the award, but I'm not going to give it back," Timberlake said. "I'm taking this home."
Macklemore & Ryan Lewis were the night's other top winners, taking home trophies for best hip-hop video and best cinematography for Can't Hold Us, and best video with a social message for Same Love. They performed that song with Mary Lambert and Jennifer Hudson in a show-stopping moment.
"Gay rights are human rights," Macklemore said during the telecast. "There is no separation."
It was one of the few poignant moments in a night filled with spectacle, spite and lots and lots of skin.
Up till then, the ladies of pop music dominated as an X-rated Cyrus became the rare artist to upstage the recently rehabilitated Lady Gaga. But a vengeful Swift managed to take the spotlight from both after appearing to utter an expletive to Selena Gomez when One Direction and rumored former love interest Harry Styles appeared at Sunday night's award show - a moment that lit up Twitter and was memorialized immediately in a GIF online.
Swift wasn't the only one with a strong reaction to One Direction - cheers mixed with boos as they won song of the summer for Best Song Ever.<
And she gave a shout out to an unnamed former beau for helping her win another moonman trophy for I Knew You Were Trouble in the best female video category.
"I also want to thank the person who inspired this song, who knows exactly who he is, because I got one of these," Swift said. "Thank you so much!"
Gaga changed costumes four times during her first return to the stage since hip surgery as she performed her new single Applause at the top of the show. It was a predictably unpredictable appearance for Gaga, who pumped in boos over the sound system as she opened the song in a white nun's habit and square headdress.
By the time she finished the song, she was surrounded by unitard-clad male dancers and wearing a thong bikini decorated in shells and a long blonde wig.
Cyrus immediately kicked things up well beyond provocative, however, as she appeared on stage with a multitude of dancing teddy bears in a bodysuit adorned with a cartoon character. She twerked to her song We Can't Stop, changed into a nude bikini, ran a fan's foam finger along her privates as Robin Thicke appeared on stage to perform Blurred Lines, then gave the singer a lap dance.
"Miley better go get a pregnancy test after all that grinding," comedian Kevin Hart joked afterward. Rihanna didn't even have to take the stage to get a social media reaction after appearing to offer a sour face to Drake during his high energy performance of Started From the Bottom.
Kanye West continued his stark portrayal of new music from his album Yeezus, performing Blood on the Leaves with its controversial Nina Simone Strange Fruit sample in silhouette in front of a black and white picture of a tree.
And Katy Perry, who arrived sporting a bejeweled grill bearing the name of her new single Roar, finished off the show by singing the song dressed as a boxer.
No one got the kind of time Timberlake did, though.
Dressed in a black suit and black hat with a red feather, he powered through a breathless series of solo hits before the other four members of 'N Sync - JC Chasez, Chris Kirkpatrick, Joey Fatone, and Lance Bass - joined him on stage, opening with Bye Bye Bye. Timberlake's Suit & Tie also won for best editing and best direction by David Fincher.
"Half of the moonmen I've ever won, I won with those four guys right there," Timberlake said pointing at his former band mates while holding the Vanguard trophy. "So above all else, I'm going to share this - we can keep it my house - but I'm going to share this award with them."
Other winners included Pink and Nate Ruess for best collaboration, Bruno Mars for best male video, Gomez for best pop video, Thirty Seconds to Mars for best rock video and artist to watch Austin Mahone.