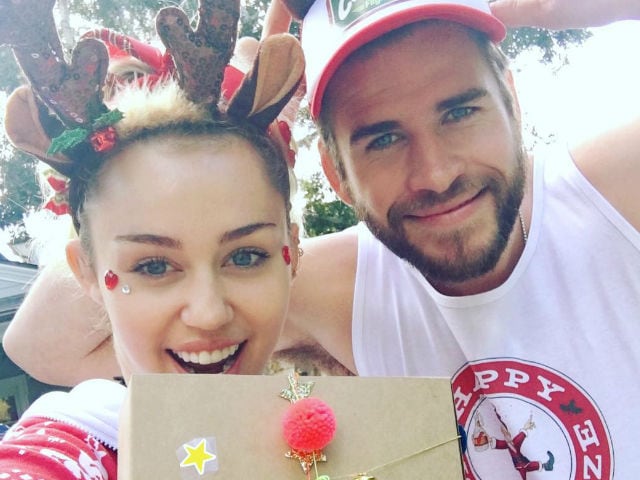 Miley, Liam and Doras spent the day together like "family." (Image courtesy: mileycyrus)

Miley Cyrus spent Christmas with actor Liam Hemsworth and her newly adopted dog, Doras, as a "family" and they seemed excited in the picture shared by Miley on Instagram. Liam, 26, posed lazily dressed in red pyjamas while the Hannah Montana star opted for vibrant leggings and red sweatshirt - Doras lay in between. In another post Miley said that Christmas makes her sad because "it is filled with so much excessiveness and greed." Miley, 24, said in the Instagram post her family always "made Christmas about others." Miley then shared the picture with Liam and Doras and said: "What a perfect holiday present for your family to adopt and save a life. Think about it."
Here's are the two posts shared by Miley which have gone viral:


Thinking about how lucky we are to spend Doras first Xmas together as a fam! Our big and beautiful rescue! What a perfect holiday present for your family to ADOPT & SAVE a life! Think about it! If you go for it send me pictures you know I am obsessed with animals! Obvi! #adoptdontshop

Call me the grinch but "Christmas" always makes me feel deeply sad. It is filled with so much excessiveness & greed... I just hope everyone gives the gift of love and acceptance this year to not only their own family but those around the globe who don't get everything they wished for due to life's unfair circumstances! My parents always made Christmas about others and I hope you find it in your heart to do the same! @happyhippiefdn is what I am most thankful for this year because of the purpose it gives me. Without it I would feel so lost and useless on this planet! Thank you to all those who support our mission and I hope EVERYONE has a magically Merry whatever you celebrate!!!!!! #celebrateloveveryday

Miley Cyrus and Liam Hemsworth recently reunited following their split in 2013. However a source recently told Australia's NW magazine that the Wrecking Ball hitmaker is no hurry to get married, reported Female First. "She's dropping all these hints that she's not marriage material but he's not catching on at all."
Miley and Liam first started dating in 2009 after they met on the set of The Last Song. They got engaged in 2012, however, after a year, they went their separate ways.