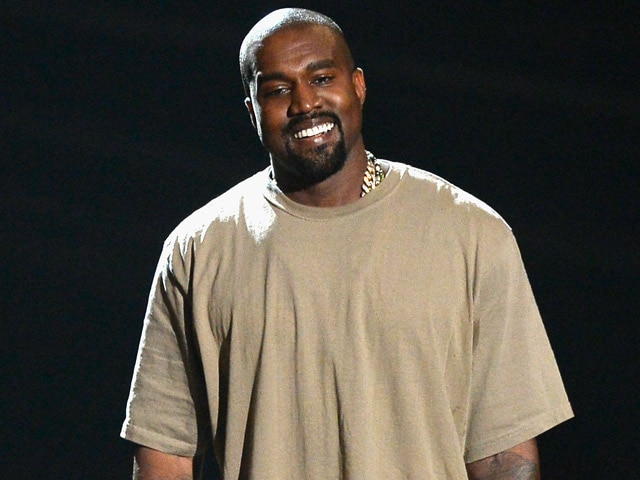 "I have decided in 2020 to run for president," he bellowed into the microphone at the end of a rambling address. Kanye, who was cheered by his biggest fan, wife and reality star Kim Kardashian, added, "I will die for the art, for what I believe in and I ain't always gonna be polite"

Mercurial rapper Kanye West used the MTV Video Music Awards in Los Angeles to announce a run for the White House in 2020 after winning a career achievement award.
Cheered by his biggest fan, pregnant wife and reality star Kim Kardashian in a lace-up olive dress that left little to the imagination, he was greeted by an extended standing ovation.
"I have decided in 2020 to run for president," he bellowed into the microphone at the end of a rambling address in which he also appeared to confess to smoking marijuana before taking the stage.
"I will die for the art, for what I believe in and I ain't always gonna be polite," he said. The hip hop star joked that people would think he smoked "something" before stepping out for the evening. (Also Read - MTV VMAs: Taylor Swift Dominates With 4 Wins)
"The answer is yes. I rolled up a little something. I got the answer," he said. "We're the millenials bro.
"This is a new mentality, we're not going to control our kids with brands. We're not going to teach low self-esteem and hate to our kids. We're gonna teach our kids that they can be something," he said.
MTV's Video Vanguard lifetime achievement award has previously been given to artists including Madonna, Michael Jackson and Beyonce.
"Trump you have my vote but now Kanye West," shouted shock pop diva Miley Cyrus, the host of the show.
The 38-year-old boundary-pushing rapper also won best Video With a Social Message for "One Man Can Change the World" with Big Sean and John Legend.
Otherwise the night saw pop superstar Taylor Swift take an early lead, winning two of her whopping 10 nominations and burying the hatchet with rapper Nicki Minaj.
Taylor Swift Dominates
Taylor Swift won Best Pop Video and Best Female Video for her hit Blank Space, beating Beyonce in both categories and former foe Nicki Minaj in the second.
But if Nicki hugged and made up with Taylor, then she called out host Miley Cyrus for telling The New York Times in a recent interview that Nicki was "not too kind" and "not very polite." (Also Read: Miley Cyrus, Feeling Empowered, Returns to the MTV Stage)
"She had a lot to say about me the other day in the press," she said on stage, after thanking her pastor for winning Best Hip Hop Video for Anaconda.
Miley, who made MTV award history two years ago by twerking on stage with Robin Thicke in a flesh-colored bikini and cavorting around with a foam finger kept her response civil.
"We're all in the industry, we all do interviews, and we all know how they manipulate" what we say, she said.
In a surprise start to the awards show, Taylor joined a resplendent Nicki, festooned in a red tribal-style headdress, at the end of her opening set when they broke into her hit record Bad Blood and embraced.
They hit the headlines last month when Nicki's Anaconda was passed over for a Video of the Year nomination. (Also Read: Taylor Swift vs Nicki Minaj in Tweet Exchange on VMAs)
She blamed the slight on bias against full-figured black women, saying the music industry preferred "very slim" women.
The very slim Taylor, who is Sunday's most nominated star, responded to Nicki that "I've done nothing but love and support you" and invited her to share the stage if she wins for her video Bad Blood.
Nearly two days later, she backtracked and apologized. Nicki said she wished that Taylor had spoken out on portrayals of African American women. (Also Read: Taylor Swift Ends Bad Blood With Apology Tweet to Nicki Minaj)