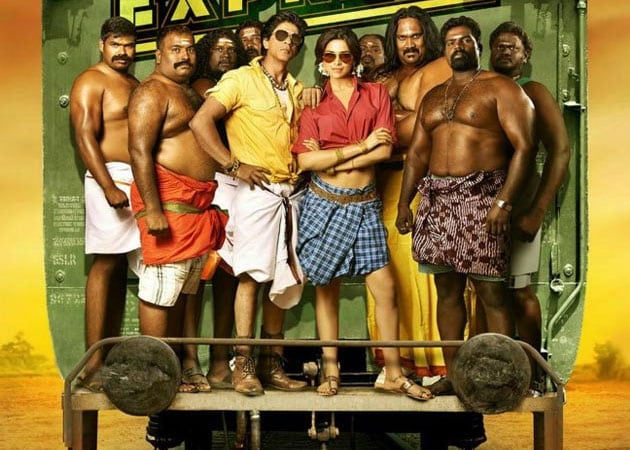 Rohit Shetty's much-awaited entertainer Chennai Express boasts of a soothing bouquet of typical Bollywood numbers and some peppy tracks with exceptional mixing. The music album has eight tracks, including a mash-up.
The album rightly sets the pace with One two three four. This one surely has the potential to become a hit dance number. With Vishal Dadlani and Hamsika Iyer taking the lead, the tapori-style track is catchy, peppy and energy-packed. You'll go hitchik hitchik after this one!
Titli, the second track, lives up to the beauty of its name. Sung by Chinmayi Sripaada and Gopi Sunder, the track, backed by soothing music, is typically romantic by Bollywood standards. Its rhythm grows on you.
Next up is Kashmir main, tu Kanyakumari. Yes, the song has a quirky title, but it just goes on to depict how different are the lead characters, essayed by Shah Rukh Khan and Deepika Padukone, in the film. It's tough to slot the genre of this song, but singers Sunidhi Chauhan, Arijit Singh and Neeti Mohan have made it worth a hear with their talent. It leaves the listener happy.
If rap in India can be taken to the a new level in Bollywood, then Ready steady po has done it! An interesting number, it is sung by an ensemble of Brodha V., Natalie Di'luccio, Smokey, Enkore and Vishal Dadlani. Quite an experimental song, one must say! And you can't miss its international appeal. A hip-hop touch to the song makes it classy and catchy. This one is likely to become an anthem of sorts.
The title track, Chennai Express gives you a nostalgic feeling, and why not? It is crooned in the melodious voice of southern singer SP Balasubramaniam. He comes back to Bollywood with this one after a long time, and how! The music is edgy and peppy, making you give a miss to the sometimes off-the-track lyrics.
A dubstep version of Titli is a must listen. The combination of a Bollywood romantic track, some south Indian beats and dubstep, this experimental song is music to the ears, literally! Kudos to the composers for this fusion track.
Overall here's another winner from Vishal-Shekhar. It is likely to appeal to music lovers of all age-groups and sentiments. An entertaining all-rounder, the composers must be applauded for fusing different music and beats to pep up the otherwise usual Bollywood music.